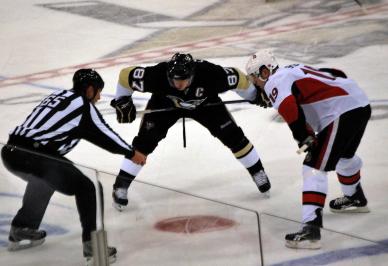 Game 3: Series Tied, 1-1
The series shifts to Ottawa tonight as the Pittsburgh Penguins and Ottawa Senators each went through their pre-game preparations this morning.
For Ottawa there will be no lineup changes and no consideration from head coach Cory Clouston to put former 50 goal scorer Jonathan Cheechoo back in the lineup.
Coming off a game 2 win, Pittsburgh will not make any line changes upfront. Ruslan Fedotenko was the odd-man out in today’s skate and will be a healthy scratch for the second consecutive game.
Goaltender Brent Johnson has re-joined the team and will serve as the Penguins backup goaltender tonight.
Defenseman Jay McKee will see his first action of the playoffs as the veteran will replace Jordan Leopold in the lineup who did not travel with the team to Ottawa due to a concussion. McKee who has handled his demotion out of the top-6 like a true professional is ready for the opportunity to make his mark in the playoffs.
“I signed here to be a part of this team and do something special in the playoffs and I wanted that opportunity, McKee said following Pittsburgh’s optional skate on Saturday.
McKee will be paired with defenseman Alex Goligoski. The two were partners for much of the season prior to the addition of Jordan Leopold.
As the Penguins look to take a 2-1 series lead, the Senators focus is shifting towards slowing down Sidney Crosby and having the last change will favor the Senators.
“We expect a healthy dose of #4 and #24 out against the lines that they want to defend against,” Dan Bylsma said. “It’ll be that much tougher to get away from them.”
However, Bylsma does not appear overly concerned about the matchup and is a big believer in going strength against strength.
Pittsburgh’s top line of Chris Kunitz – Crosby and Bill Guerin had a solid game in Friday’s win and will look to build off of Friday’s game.
In games 1 and 2, Senators head coach Cory Clouston tried to match Jason Spezza’s line up against Crosby’s line with Mike Fisher getting the assignment against Malkin.
Getting Evgeni Malkin’s line, most importantly Alexei Ponikarovsky going, is a top priority for the Penguins.
I was told by a high ranking official this weekend, that the Penguins are pleased with the little things that Ponikarovsky has brought to the table but two goals in 18 games is not what the Penguins imagined.
There is word that Max Talbot could be playing his way into some situational shifts on Malkin’s right wing.
Bylsma used Talbot – Malkin and Crosby together for a shift late in the 1st period of game 2 but has rarely used Talbot with Malkin this post-season as Talbot is just beginning to show signs of his 2009 playoff form.
Based on today’s skate, Pascal Dupuis will start the game with Malkin and Alexei Ponikarovsky.
A player somewhat on the hot seat tonight is Tyler Kennedy. A minus-3 through two games, a Penguins loss and another subpar game from Kennedy could lead to Kennedy losing a spot in the lineup for game 4.
Pittsburgh will be looking for much improved play from their third line.
After missing the playoffs in 2009, Pittsburgh should expect a hostile playoff atmosphere from the Ottawa crowd at Scotiabank Place tonight.
Ottawa was 26-11-4 at home in the regular season and will look to take advantage of playing the next two games at home.
“We’ve got the home ice advantage and we want to make the most of it,” Senators winger Daniel Alfredsson said. “We’ve played very well throughout the season at home…… We want to continue that and continue to put pressure on them.”