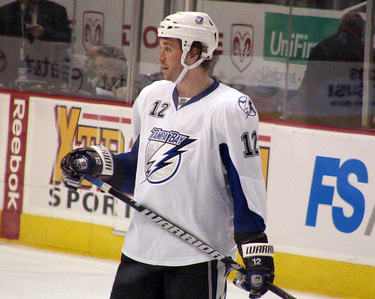 Tampa Bay 3 – Pittsburgh 1
Pittsburgh’s losing streak reached 4 this afternoon with a 3-1 loss to the Tampa Bay Lightning. The Penguins have now dropped five of six.
It was a game that Pittsburgh didn’t come to play early on as the Lightning were the more aggressive, harder working team.
*Pittsburgh had few answers for the Lightning’s top unit of Ryan Malone – Steven Stamkos – Marty St. Louis. St. Louis scored a 1:03 into the game and created a number of chances throughout the game.
Ryan Malone had a game high 7 shots on goal and is flourishing alongside Stamkos and St. Louis. On St. Louis’ first period tally, Malone drew two defenders (Orpik, Goligoski) in the front of the net on a shot from the point as St. Louis was left all alone in front.
Malone is second on the team with 19 goals but does all of the little things and pays a price to open up space for the likes of St. Louis, Lecavilaer and Stamkos.
At age 34, St. Louis is still one of the most exciting players in the game. Excellent two-way player and was phenomenal on the breakout today.
*Pittsburgh has issues in their defensive zone. The Lightning did a good job of working down low and stretching the Penguins defense.
One major issue with Alex Goligoski’s game of late is that he’s playing out of position in the neutral zone and the defensive zone. However Goligoski‘s not the only Penguins defensemen whose play has slipped in recent weeks.
*The Penguins were fortunate to end the first period tied 1-1 as the Lightning jumped on them early. Pittsburgh had a prime opportunity to turn momentum on the power play in the second period but failed to get anything past goaltender Mike Smith and were 0-for-4 in the game on the man-advantage.
This was the type of game where the Penguins needed their power play to bail them out.
With Sergei Gonchar out, the Penguins had an odd setup at the points. The Penguins showed no effort to use Evgeni Malkin at the right point for a one-timer. Alex Goligoski is showing no confidence running the power play.
*One of the few bright spots again for Pittsburgh was winger Billy Guerin. Guerin notched his 13 goal of the season and is showing no signs of slowing down at age 39.
Guerin has six goals and nine points in his last 8 games.
*Are the Penguins being exposed during their recent skid? To some extent yes. We knew coming into the season consistency from their wingers was going to be a problem but the play from their defensemen is what worries me.
Jay McKee and Martin Skoula are having some short-comings in the D-zone but the lack of offensive production from the likes of Gonchar, Letang and Goligoski is worrisome.
The last defenseman to score a goal was Mark Eaton on November 28th. That’s inexcusable with the talent the Penguins have and the system they play in which relies on their defensemen to be active in the offensive zone.
4th Liners Adams, Rupp a -2
The Penguins fourth line of Michael Rupp – Craig Adams – Max Talbot did not have a strong game. Rupp and Adams each had a plus/minus rating of -2. Alex Goligoski and Brooks Orpik were also a -2.
Fleury has a solid game in loss
Marc Andre Fleury was one of the few Penguins who showed up to play today. Fleury made 34 saves in the loss. Fleury has now lost three straight games.
Injury Report
*As expected Sergei Gonchar did not play due to a foot injury. Gonchar indicated today that he will try to participate in warmups tomorrow. He’s questionable at best right now for Sunday’s game.
Eric Godard was the Penguins healthy scratch upfront.
Post-Game Quote: “No its been different things every game {Crosby on 4 game losing streak}, ” Sidney Crosby said. “I think common thing for us is that we haven’t spent enough time in the other teams zone.”