Game 79: Rupp back in; Kunitz out for tonight’s game; Malkin late scratch 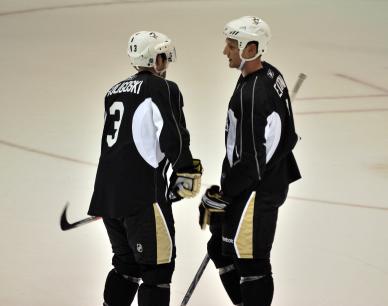 Washington Capitals (52-15-12-116pts) @ Pittsburgh Penguins (45-26-7-97pts)
7:28 p.m. –Pittsburgh Penguins center Evgeni Malkin will be a late scratch for the Penguins tonight. Malkin participated in warmups for only a few minutes before leaving the ice early.
According to the Penguins, Malkin has an illness.
Pittsburgh will therefore dress 11 forwards and 7 defensemen
Updated lineup
Fedotenko – Crosby – Dupuis
Ponikarovsky – Talbot – Guerin
Cooke – Staal – Kennedy
Rupp – Adams
Defensemen
Orpik – Letang
Eaton – Gonchar
Goligoski – Leopold
McKee
March Andre Fleury will start in goal
From Earlier
Winger Chris Kunitz will not play tonight against the Washington Capitals due to an upper body injury. Kunitz left in the second period of Saturday’s game and did not return. The Penguins are being mum on the extent of the injury.
Kunitz did not practice on Monday and was not present at the Penguins morning skate today.
Michael Rupp will return to the lineup after being a healthy scratch in Saturday’s game. Rupp expressed his displeasure on Monday about being scratched against the Thrashers.
Pittsburgh will go with the same lines they used in practice on Monday. Marc Andre Fleury will start in goal for Pittsburgh.
Coming into tonight’s game there was talk that the Capitals were going to rest players and that appears to be the case. Defenseman Karl Alzner and forward Jay Beagle have been recalled from the Hershey Bears this morning and will participate in the Capitals morning skate.
Capitals defenseman Mike Green is expected to be held out for the second straight game. Semyon Varlamov will start in goal for the Capitals.