PENGUINS – BLUE JACKETS GAME DAY BUZZ
— A key focus tonight going into Game 2 is on the goaltending. Does Sergei Bobrovsky bounce back and can Marc Andre Fleury stop the Game 2 curse?

Fleury has lost his last four Game 2’s.
2013 Round 1 vs NYI – 4 goals on 38 shots (.905 save percentage)
2012 Round 1 vs PHI – 7 goals on 30 shots (.767 save percentage)
2011 Round 1 vs TBL – 4 goals on 20 shots (.800 save percentage)
2010 Round 2 vs MTL – 3 goals on 21 shots (.857 save percentage)
The last time Fleury won a Game “2” was against Ottawa on April 16, 2010. That series was also the last time Fleury won a series. Fleury has not won consecutive home playoff games since June 2, 2009 and June 4, 2009 vs Detroit (Games 3, 4) in the Stanley Cup Finals. A win tonight and it will be a start in the right direction for him.
— Todd Richards and Dan Bylsma are both coaches who believe in the same philosophy. Play fast and get pucks deep. Because of personnel differences, Columbus is a bit more aggressive/harder forechecking team, but what both coaches believe in is about the same. It’s not a surprise because Bylsma learned under Richards in Wilkes Barre prior to Richards leaving the Penguins organization (join Sharks coaching staff) in the summer of 2008, just days after Michel Therrien signed a three year extension.
“We want to play fast,” Richards said this afternoon of his hockey club. “This is a team where if you’re turning pucks over they will make you pay.”
A focus for the Penguins is the forwards giving their defensemen some help when pressured hard by Columbus.
“They play a style where they put a lot of pucks in, come hard, fast, finish checks to keep guys from getting up ice,” Penguins winger Chris Kunitz said of the Blue Jackets.

— The Penguins coaches plan to keep Brian Gibbons on the top line tonight. “Gibby has a lot of speed,” Chris Kunitz said. “Has a knack to take that puck and go through the neutral zone and be able to stop and turn up…… He’s really good defensively.”
Gibbons being the better defensive player to Beau Bennett is said to be another reason for the switch. Bennett has seen his ice time decrease significantly of late when the Penguins are holding a lead in the third period. 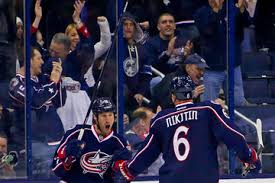 — The Columbus Blue Jackets will get R.J. Umberger back in the lineup tonight. “I’m excited to be back tonight,” Umberger said following the morning skate. Unfortunately for the Blue Jackets, Nick Foligno is not ready yet. Umberger had 18 goals and 34 points during the regular season but he found himself in Todd Richards doghouse late in the regular season prior to suffering a shoulder injury that has been nagging him for a while.
Umberger was a healthy scratch on a few occasions since the Olympic break but here’s something he adds tonight that a lot of players on the Blue Jackets roster don’t have on their resumes; Big time goals in the playoffs. Umberger comes into tonight’s game with 14 goals and 19 points in 26 career playoff games. Umberger, though, hasn’t appeared in the post-season since 2009 and he was a better player back then. He will skate on a line tonight with Artem Anisimov and Blake Comeau.
“I’m expecting him to come out, play fast, play big,” Richards said. “He’s one guy who consistently all year what he’s done well for our team is gone to the net, play hard to the net. One thing he’ll provide {tonight}.”
The Penguins are aware of what Umberger brings to the table.
All of the talk from players in the locker room was about how the Penguins have to be aware of Umberger in front of the net.
“He’s a player that plays a physical game, hangs around the net,” Kunitz said…..”He’s going to make it tough on our d-man.”
“He’s a big guy who brings physical play to their lineup,” Sidney Crosby said. “He good in front of the net and can score goals.”