The university of Pittsburgh filled their Athletic Director position on Monday by naming Heather Lyke their new AD.

Lyke had served as Vice President and Director of Athletics at Eastern Michigan since 2013. Prior to her EMU tenure, she was a ranking athletic administrator at Ohio State for 15 years. A native of Canton, Ohio, Lyke additionally held posts at the University of Cincinnati and with the NCAA.

“Heather Lyke’s track record exemplifies her dedication to student-athletes. She has a passion for success in the classroom, on the playing field and in life after graduation,” said Gallagher. “She is the perfect person to lead our Department of Athletics into a new era of excellence, and I am thrilled to welcome her and her family to Pitt.”

There was a lot of like from Lyke’s introductory press conference.

She brings enthusiasm and passion to the job and she hit all the right notes by endorsing the Pitt script, and knowing she’s eventually going to be viewed on whether the football program can take that next critical step and be relevant again.

One area that Pitt was drawn to Lyke is her fundraising ability and she made it clear fundraising is critical to building up the football program.

“I would say that fund raising is an essential responsibility of the athletic department, the athletic director. And it’s something I — you know, we love to do,” said Lyke. “It’s about, again, building relationships, sharing your vision and people who care about the University of Pittsburgh and the Pitt athletic program, how they can help you continue to build upon that vision. Outside financial resources are essential and, you know, we want them to — we want to conduct donors back in a meaningful way and give them experiences that they might not otherwise have. And I would say that everybody in the athletic department and everybody at our university we’re all fund raisers. We’re all talking about the extraordinary things that are happening on campus, both academically and athletically. And in order to do those extraordinary things and compete at a certain level, you need additional resources. And you know, I love to build those relationships, talk about what we’re doing. It’s really a result of what the coaches and student-athletes are doing on a — and sharing that knowledge.”

The obstacle anyone at Pitt including Lyke has is getting enthusiasm back with the football program. This is a pro town, Pitt doesn’t have the luxury of having their own campus stadium.

This is also an area where there are a ton of Penn State, West Virginia fans also living.

Lyke talked about going and playing at Heinz Field should be a “unique” experience but it just doesn’t have that feel to many and that won’t be changing.

There’s obvious hurdles that are likely to remain.

Football always rules the day but a priority for Lyke and her staff has to be fixing the basketball program. And going with an outside AD means Kevin Stallings seat will be very hot going into year two. Pitt never lands the blue chip player but in basketball you can build your program up so quickly, Pitt can’t be married to the idea that Stallings deserves 3-to-4 years to prove himself.

Making the basketball program relevant again and a perennial top-25 team is a lot easier with the right coach than it’s going to be making Pitt football a consistent force in the ACC and a program that becomes a top ticket in town again. [hide] 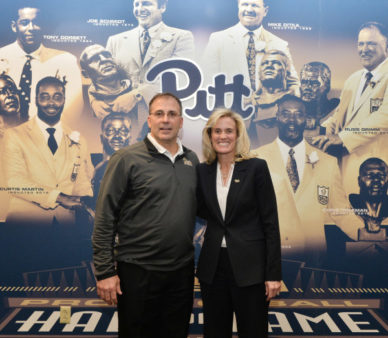 Fire Stallings, right f—ing now and bring in someone who can recruit in Western Pennsylvania, Ohio, New York, and in the East where there is plenty of BB talent

Does Pitt have a basketball team?

Pitt missed a golden opportunity to showcase the Oakland Zoo on national TV the past 15 years. That would have been a major image boost if viewers tuning in were able to witness an energetic, color coordinated student section rather than getting a glimpse of the boring, old boosters and their families who arent even watching the game half the time from their suites. Flip the cameras, increase awareness of one of the programs top selling points.

Stallings has a solid recruiting class coming in next year. MUCH better than Jamie Dixon’s the last 4 years which has netted only one average player in Cam Johnson. The coach absolutely should have two more seasons to prove himself with his own players – not the D2 talent Dixon left him with.

bring back the pitt is it slogan