Huntington confirms Pirates have remained in contact with Cedeno’s agent but team is actively exploring upgrade via free agency, trade 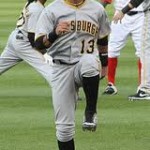 PIRATES SHORTSTOP SEARCH
Word out of the GM Meetings is that the Pirates search for a starting shortstop has intensified this week with the team also gauging the trade market for a potential starting shortstop.
“We continue to explore various options at shortstop and the various avenues of acquisition, ” GM Neal Huntington told Inside Pittsburgh Sports this afternoon, confirming that the team is also looking at the trade market.
Huntington and the Pirates have shown strong interest in Astros shortstop Clint Barmes who manager Clint Hurdle coached in Colorado. Barmes agent Barry Miester would not comment on the Pirates interest but several teams are showing interest and Barmes is looking for a multi-year deal worth over $4 million annually, something the Pirates are leery about but not fully against.
The team has also showed interest inÂ 32 year old infielderÂ Ramon Santiago who hit .260 with 5 home runs and 30 RBI’s with the Tigers last season. Santiago only appeared in 27 games at shortstop for the Tigers in 2011, while appearing in 85 games at second base. He also has the ability to play third base.
On the trade market, Padres shortstop Jason Barlett is surfacing again but it’s not clear whether the Pirates will aggressively pursue Bartlett via trade like they did last off-season. However, the 32 year old has been extremely disappointing at the plate the past two seasons, since batting .320 with 14 home runs and 66 RBI’s for the Rays in 2009.
Bartlett batted just .245 last season with 2 home runs and 40 RBI’s.
Meanwhile, where does Ronny Cedeno stand in the Pirates plans?
“We have remained in contact {all off-season} with Cedeno’s agent, ” Huntington said today.
The Pirates declined Cedeno’s $3 million option but baseball executives don’t believe the Pirates will find a better replacement.
Manager Clint Hurdle is not a fan of Cedeno’s and would like a more reliable veteran presence. Sources say Hurdle believes upgrading at the shortstop position is pivotal to the Pirates improving next season.