If the Penguins have to go searching for a No. 1 goaltender this winter, look for Simon Despres to be the trade bait 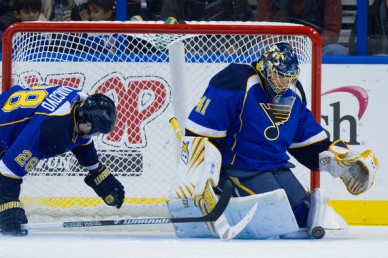 LATEST RUMBLINGS
The Penguins get criticized for not embracing a youth movement and some wonder if they will ever embrace one, and actually open up spots in the coming years for their young core blueliners. Will the team really not resign Brooks Orpik, Matt Niskanen and so on? That’s a story for another day.
Word out of the organization, though, is they envision Derrick Pouliot, Olli Maatta and Scott Harrington all being in the NHL around the same time (Maatta, Harrington closer than Pouliot) and being a huge part in the Penguins top-6 for years to come.
There’s no sense the organization feels the same way about Simon Despres and I’m hearing some question whether Despres ceiling is anything more than a No. 3 pairing defenseman.
Hence, expect to hear a lot of Despres trade rumors this season and expect the Despres trade talk to ramp up if Marc Andre Fleury never finds his footing this season.
There is an uneasy feeling about Fleury from management and Tomas Vokoun’s injury and age (37) has it a realistic possibility that the Penguins could be in the market for a No. 1 goaltender at somepoint this winter.
If the Penguins unfortunately feel the need to go search for a No. 1 goaltender, Simon Despres is going to be the trade bait.
One NHL source said there’s been rumblings since the summer about a Despres – Jaroslav Halak trade and there is some smoke there.
Scouts inside the organization are very high on Halak and the Blues have been known to be high on Despres. Could be a perfect match in the coming months.
Another name to keep an eye on will be Anaheim’s Jonas Hiller who is entering the final year of his deal. The Penguins like Hiller and many believe the Ducks would be willing to move him for the right deal due to the goaltending depth in their organization and John Gibson close to being NHL ready.
There are some intriguing options out there and the Penguins have a trade piece in Despres they would be willing to move that gives the Penguins options to address the No. 1 goaltender spot if it comes to that, which they obviously hope it doesn’t
MORE BUZZ
*The Penguins beat the Chicago Blackhawks 3-2 in a shootout Monday night against a Blackhawks team missing several regulars, and Bylsma was not happy with the Penguins effort. The Penguins have looked disinterested in the preseason and it wouldn’t be surprising to see them play some uninspiring hockey for the first month of the season or so before they turn it on.
“I don’t think we played too well,” Kris Letang said.
One positive attribute, though, that Bylsma has is he’s always been able to keep the Penguins playing inspired hockey during the regular season.
*Kris Letang scored twice Monday night and having Rob Scuderi as a security blanket, Letang figures to be in line for a huge offensive season. He averaged 1.09 points per game last season. What’s interesting with Letang in watching him in practice and the preseason is he seems to be making a concentrated effort to get the puck on net.
*Jeff Zatkoff played well in his first preseason start, making 30 saves on 32 shots, and going 2-for-2 in the shootout, stopping Bryan Bickell and Brandon Pirri. Zatkoff played aggressive and looked confident out there.
“Look at overall performance, came up big in shootout with two saves,” Bylsma said. “Right from start, I thought he was strong, confident, aggressive, made some big saves. I thought he looked strong and confident.”
*Matt D’Agostini suffered a lower body injury in Monday’s game. Something to monitor with the season nine days away from opening night. Chuck Kobasew figures to move into D’Agostini’s spot for now.