Inside Look at the Steelers 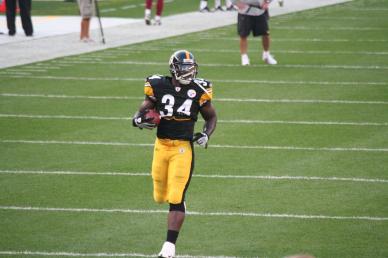 Mendenhall to start against Cleveland
*Ben Roethlisberger has emerged as one of the games top quarterbacks and it shouldn’t come as a surprise. Roethlisberger leads the league in completion percentage (73.8 %) and is second in the NFL in passing yards (1470).
*I have always regarded Roethlisberger as a top three quarterback in the NFL but the main reason Roethlisberger has made that final step in his progression is his ability to check down to his running backs and tight ends.
Heath Miller is on pace for a 93 catch season and running back Rashard Mendenhall has added another dimension for Roethlisberger in the passing game.
In year six, Roethlisberger is seeing the field so well and he’s surrounded with a number of weapons. What’s intriguing to watch the rest of the season is that the Steelers passing game hasn’t even reached its potential yet.
*Rashard Mendenhall will start at running back against Cleveland and moving forward the starting job is his to lose. Indications are Mendenhall will get the bulk of the carries against Cleveland and the flow of the game will decide how many touches Willie Parker will get.
Head-to-Head Comparison
RB Rashard Mendenhall (52 CAR – 287 yds – 3TD – 5.6 avg)
RB Willie Parker (52 CAR – 159 yds – 0TD – 3.1 avg)
*Is one of the Steelers top pass catchers not happy?
There has been a lot of rumblings around the Steelers facility this week that Santonio Holmes is not happy about his lack of production over the past couple weeks and feels he’s not getting the ball enough.
Holmes is third on the team with 23 receptions but only has 9 receptions in his past three games. Give him credit though for saying all the right things to the media and he has been getting a lot of double teams.
Holmes is clearly frustrated though. He is in the 4th year of a five year contract and he could be in line for a major pay day from the Steelers this off-season.
*It remains to be seen how much Troy Polamalu will play on Sunday but he start against Cleveland.
*The Steelers believe they are in much better shape than they were in 07 when Aaron Smith was lost for the year near the end of that season.
Teams will test the Steelers early to see if they can stop the run without Smith. One player to watch is Nick Eason. Played well last year.
*Ryan Clark has not made an decision yet on his status for the Steelers showdown with the 5-0 Denver Broncos on November 9th.