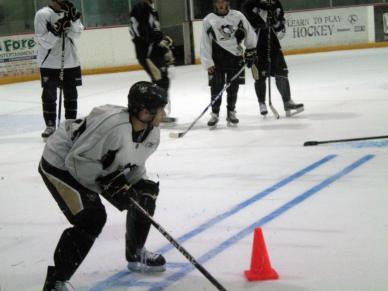 The Pittsburgh Penguins will hold their 2009 prospect camp from Saturday, Sept. 5 to Thursday, Sept. 10 in Kitchener, Ontario. Penguins’ prospects will compete in a Rookie Tournament at the Kitchener Memorial Auditorium against prospects from the Toronto Maple Leafs, Ottawa Senators and Boston Bruins.
The annual rookie tournament is a great opportunity for young forward Dustin Jeffrey to make an early impression to the Penguins staff before training camp begins on September 12th.
Of all the prospects invited to training camp, Jeffrey has the best shot of making the team.
In fact, the Penguins plan to give Jeffrey a prime opportunity to win the 4th line center job.
The organization would like to play Michael Rupp and Craig Adams on wing, which will open a spot for Jeffrey.
Pascal Dupuis will move to the 2nd line to open camp. Dupuis is expected to be given the first shot to play with Evgeni Malkin, due to Max Talbot being sidelined for another 6-8 weeks.
Jeffrey is a solid two-way player, who plays well in his own end. Slightly above average skater with some puck skills.
In training camp, one area where Jeffrey will have to improve is moving the puck quicker. At times he holds onto the puck too long and while he will be able to get away with it at next weeks prospect tournament, that won’t be the case in two weeks.
To win the 4th line center job, it will come down to Jeffrey’s ability on face-offs and play a role on the penalty kill.
Concern over injury to top four defenseman?
There’s a bit of concern in the organization regarding an injury to a top four defenseman and it’s not Sergei Gonchar or Kris Letang.
Brooks Orpik is nursing a right wrist injury that will not be 100% when camp opens. The Penguins don’t expect him to be limited but there’s some concern that this could be something that bothers him throughout the year.
Right now the Penguins don’t have much defensive depth at all. Jay McKee is injury prone and Ben Lovejoy has only appeared in two NHL games.
As of Tuesday, the team has yet to receive a decision from Philippe Boucher who is expected to meet with the Penguins staff next week. Boucher is considering a return to Pittsburgh or retirement.
Contract Updates
Nothing new on either front……Contract talks with Sergei Gonchar’s camp will pick up following Labor Day. Gonchar is in very good shape heading into the season.
As for Kris Letang, the team expects to make a re-vised offer before the regular season. Letang turned down a four year offer in early August. Letang’s camp did not make a counter offer.
Both sides expect talks to go into the season.