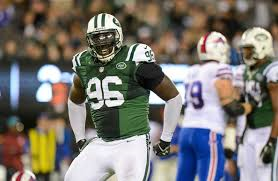 The 3-2 New York Jets are 2.5 points favorites for Sunday’s game vs the Pittsburgh Steelers. A month ago few would have predicted that after the Jets were the laughing stock of the league in the off-season.
How things have changed so quickly for the 0-4 Pittsburgh Steelers. Despite having a rookie quarterback, this is a matchup that looks to favor the Jets.
New York enters Sunday’s game with the No. 2 ranked overall defense and are second in the NFL in stopping the run. The Jets have just three takeaways but Rex Ryan has this group back to being one of the best units in the NFL and they get to the quarterback with 16 sacks on the season.
A major matchup problem for the Steelers will be slowing down the Jets defensive line. What makes this defense so good is the Jets ability to control the line of scrimmage and it starts with their defensive line. The Steelers will have their hands full especially with defensive end Muhammad Wilkerson who is a beast and an emerging into a star. Wilkerson has 4 sacks and 2 forced fumbles on the season.
Wilkerson was taken one pick ahead of Cam Heyward in the 2011 draft. Pittsburgh might end up with a good player in Heyward but the Jets ended up with a star.