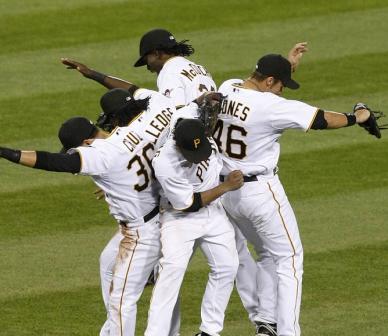 Pittsburgh 11 – Los Angeles 5
Garrett Jones (2) homered twice and Zach Duke (1-0) gave up two runs on seven hits over five innings as the Pittsburgh Pirates defeated the Los Angeles Dodgers 11-5 to claim their fourth straight opening day win.
Jones homered in his first two at-bats, and Ryan Doumit added a three-run eighth inning homer as the Pirates got production from all areas of their lineup.
The Pirates broke the game open in the bottom of the 5th inning.
With a focus from management on being more aggressive on the base pads near the top of the lineup, No. 2 hitter Andrew McCutchen was the catalyst sparking a five-run 5th inning.
Leading off in the inning, McCutchen was hit by pitch, then stole second to get in scoring position.
After moving over to third on a Garrett Jones ground out to first, with no outs and two men on base, Lastings Milledge hit a ground rule double to deep right, scoring McCutchen and the Pirates began to break the game open.
Three batters later, Ryan Church hit a pinch-hit three-run double as the Pirates jumped out to a 7-2 lead. No. 9 hitter Ronny Cedeno then singled to shallow center, scoring Church to make it 8-2 and finishing off a five-run inning.
With Zach Duke batting 8th in the lineup, manager John Russell was forced to have Church pinch hit for Duke in the 5th as the bases were loaded and the Pirates needed runs. Duke threw only 79 pitches in the win.
Trailing by six-runs, the Dodgers closed the gap with a three-run seventh inning highlighted by a Manny Ramirez’s two-run single.
Reliever D.J. Carrasco struggled in the 7th, walking Rafael Furcal to open the inning and then hitting Russell Martin with a pitch. Evan Meek relieved Carrasco after Ramirez two-run single.
In the top of the 8th inning, the Dodgers were looking to strike once again with 1 out and runners on first and third but set up man Brendan Donnelly struck out both Russell Martin and Andre Ethier to end the inning and secure the Pirates three-run lead.
In the bottom of the 8th, Pittsburgh put the game away. With two outs, Andrew McCutchen doubled to deep center that was followed by a Garrett Jones walk. Ryan Doumit then homered to left to make it a 11-5 game.
Octavio Dotel came out in the 9th to throw a 1-2-3 inning to close out the game.
The Pirates host the Los Angeles Dodgers Wednesday night at 7:05. Ross Ohlendorf will start for the Pirates.
Post-Game Notes
*Winners of four straight opening days, the Pirates have lost at least 94 games in their past three seasons, including a 99 loss season in 2009.
*The Pirates open the season with the lowest payroll in baseball at $35.3 million.
*The team announced during the 7th inning that outfielder Brandon Moss cleared waivers and was sent to Triple-A Indianapolis.
* The crowd of 39,024 was the fourth largest at PNC Park.
Key Stats
*Dodgers starter Vincent Padilla gave up seven runs and six hits in 4 1/3 innings.
*Despite out-hitting the Pirates 12-10, Los Angeles had 10 players left on base to Pittsburgh’s 6
*Aki Iwamaura (0-for-3, BB, 1run) and Andy LaRoche (0-for-3) were the Pirates only starters (excluding Zach Duke) not to record a hit.
*Garrett Jones was 2-for-4 with 3 runs and 3 rbi’s for the Pirates. Ryan Doumit (2-for-4, 3rbi’s, 2 runs) and Ronny Cedeno (2-for-4, 1 rbi) also had multi-hit games.
*1B Jeff Clement went 1-for-3, with a walk and a run scored in his Pirates debut.