Kennedy out for tonight’s game 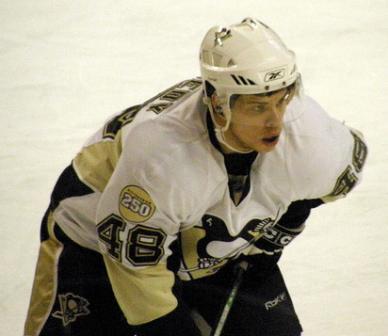 Montreal Canadiens (6-5-0) @ Pittsburgh Penguins (9-2-0)
The Pittsburgh Penguins will be without a key member of their team tonight against the Montreal Canadiens.
Right winger Tyler Kennedy is out for tonights game. Kennedy has been slowed this week with an undisclosed injury. He missed practice on Monday but did practice on Tuesday. Kennedy is second on the team with 5 goals.
Pascal Dupuis (flu) will play tonight and skate on the 4th line with Michael Rupp and Eric Godard.
Craig Adams will skate with Jordan Staal and Matt Cooke on the third line, while winger Chris Bourque will remain on the 2nd line with Evgeni Malkin and Ruslan Fedotenko.
Good opportunity for Bourque tonight. Bourque’s legendary father, Ray Bourque is expected to be in attendance.
*Marc Andre Fleury (8-1) will start in goal.
*Pascal Dupuis appears to be good to go after missing practice on Monday and Tuesday with the flu. Dupuis is skating fine and the Penguins will not make any emergency call-ups tonight.
Canadiens goaltender Jaroslav Halak will start in goal for the Habs. Halak has won four straight and is 4-1 on the season.
Penguins Lineup
Kunitz – Crosby – Guerin
Fedotenko – Malkin – Bourque
Cooke – Staal – Adams
Dupuis – Rupp – Godard
Defensemen
Orpik – Letang
Eaton – Skoula
Goligoski – McKee
*Marc Andre Fleury will start in goal
Scratches: Kennedy, Gonchar