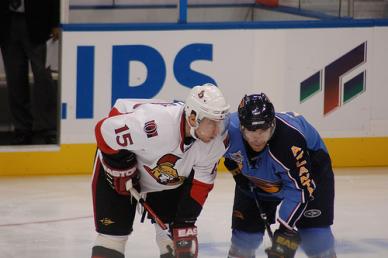 A sleeper team in the Dany Heatley sweepstakes are the Columbus Blue Jackets. The Jackets have expressed significant interest early in the process.
Adding a top flight scorer alongside Rick Nash is a priority for Blue Jackets GM Scott Howson.
Two names that have come up in talks are forward R.J. Umberger and prospect/defenseman Cody Goloubef according to league sources.
It is believed that the Jackets first round pick is also in play. The Senators also like Nikita Filatov but the Jackets don’t want to move Filatov.
Senators GM Bryan Murray is looking to move Heatley to the Western Conference with a numbers of teams including the Canucks, Kings, Sharks, Wild and Oilers already expressing interest.
Despite internet speculation linking Heatley to St. Louis, I’m hearing St. Louis is not going to make a play for Heatley.
In New York, they are looking to add scoring upfront and move some salary. They have been linked to Jonathan Cheechoo and Milan Hejduk. Two players they pursued at the trade deadline.
John Tortorella wants to keep Scott Gomez over Chris Drury but Rangers GM Glen Sather is shopping Gomez around the league. There has been brief discussions with Florida, Vancouver and Edmonton.
Mike Komisarek has declined a 6 year offer worth $26.5 million from the Montreal Canadiens. Komisarek is expected to test free agency.
Carolina is looking to sign Erik Cole for under $4 million per season. The two sides have exchanged proposals.
For now though, the Canes priorities are impending free agents F Chad LaRose and D Dennis Seidenberg.
Pittsburgh has a strong interest in moving up a few spots in the upcoming NHL Entry draft to land High school forward
Zach Budish from Team Southwest of the Minnesota Elite Hockey League.
Budish (6-3, 230lbs) is a big physical forward with soft hands and good play making ability. He is strong on his skates and works well in the corners and around the net.
What scouts like about him is that he has a high hockey IQ and gets physical with opponents, intimidating them with his size and strength. Most importantly he plays all three zones well.
He suffered season ending knee surgery in October (playing high school football) which has dropped his stock. He is currently ranked the 22nd top prospect on the board.
I’m told he performed well in combine testing and Penguins scouts believe there won’t be any long-term issues.
I’m told Budish won’t be around at #30 but won’t go before pick 20, which has Pittsburgh somewhat interested in moving up in the draft.
Budish will attend the University of Minnesota in the fall of 2009 and is at the top of the Penguins wishlist for this month’s draft.