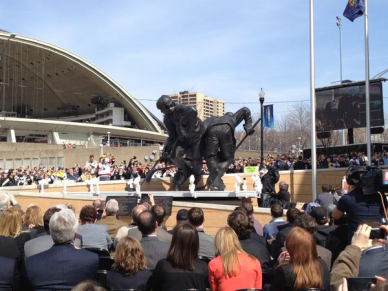 Lemieux Statue Unveiled
(Via Pittsburgh Penguins)
In front of a large crowd that included former teammates and friends of Mario Lemieux’s, the Pittsburgh Penguins unveiled a statue this afternoon forÂ Lemieux, the team’s owner and greatest athlete in Pittsburgh history who dominated a sport like no other athlete did in all of Pittsburgh sports. 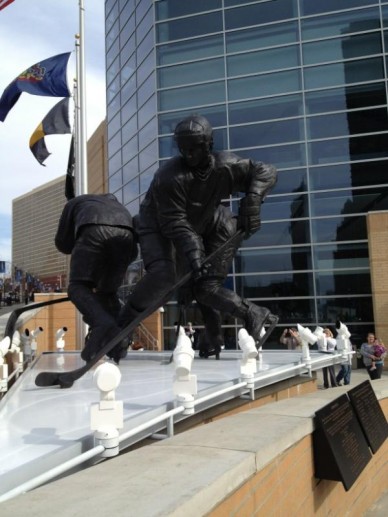 (via Chuck Greenberg)
The statue depictsÂ Lemieux from the 1980’s on a goal he scored against the New York Islanders onÂ December 20, 1988. On the play, Lemieux split through defensemenÂ Jeff NortonÂ and Rich PilonÂ (both are apart of the statue)Â before beating goaltender Islanders goaltender Kelly Hrudey for a breakaway goal. 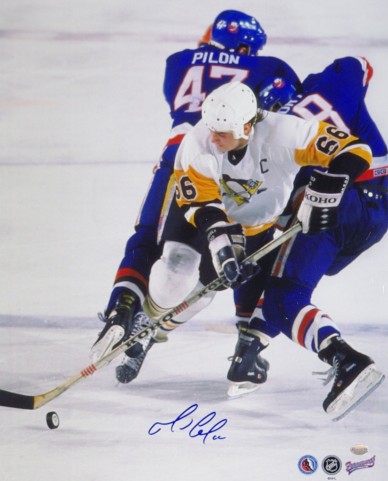 BYLSMA PONDERS CROSBY’S LINESMATES
Could head coach Dan Bylsma be breaking up the Penguins top line of Chris Kunitz – Evgeni Malkin and James Neal as early as the weekend?
It’s a possibility as Sidney Crosby continues to inch closer to the lineup with a return on Sunday vs the Bruins not being ruled out.
“Itâs a great problem to ponder and to think about what line he would play on, ” head coach Dan Bylsma said this morning. “Certainly Kunitz, Malkin and Neal have played spectacular, and been possibly the best line in hockey for two and a half months. The thought of putting Sidney Crosby in the mix there and having the best player in the world in that mix as well, is a good thing to ponder.
Bylsma has begun the process of discussing where Crosby fits in the lineup and whether to break up the top line. The thought process in the organization has been that when Crosby returns, eventually come playoff time or earlier, the team will go with Evgeni Malkin and James Neal as a pair with Chris Kunitz and Sidney Crosby playing together.
There has also been discussions of Jordan Staal getting a look at wing with Crosby, but few believe that’s a likely scenario in the playoffs as Bylsma values matchups and having Staal as a checking line/shutdown center in key situations.
Meanwhile, there is some intrigue about Steve Sullivan possibly playing with Crosby. He’s a player who’s creative with the puck and an excellent passer and could get the puck to Crosby in scoring areas.
“I think itâs natural to have thought long before yesterday about where Sidney would play and what line he would play on, ” Bylsma said today. “Thereâs certainly a lot of thought to been given to that. {I} had conversations with Sidney about that as well.
While who Crosby plays with is a hot topic right now, where he fits in on the power play will be an intriguing situation if the Penguins get to full health.
During Crosby’s eight games in action this season, the Penguins struggled on the power play, going 1-for-16 in Crosby’s last five games.
PENS TO GET A GOOD LOOK AT THIEESEN TONIGHT
Brad Thiessen makes his second career start and first start in ten days. It could be a tough situation against a desperate Toronto team that can put the puck in the net, ranking 7th in the NHL in goals.
Marc Andre Fleury 16-2-1 in his last 19 games, gets a deserved night off tonight —- as long as Thiessen doesn’t put on a Brent Johnson type performance.
HART TROPHY TALK
While there’s some chatter from some local media scribes that a strong finish to the regular season should get Marc Andre Fleury in the Hart Trophy discussion based on the impact he has on a nightly basis, don’t look for it to happen as he’s unlikely to garner any real consideration from national voters as wordÂ is some voters in theÂ national media already view Henrik Lundqvist and Jonathan Quick as top candidates for the Hart Trophy right now.
Here’s Pierre LeBrun’s latest Hart trophy tracker report that features Lundqvist and Quick in the top-5 and no mention of Fleury among 14 players mentioned:
1. PIT Evgeni Malkin
2. TBL Steven Stamkos
3. NYR Henrik Lundqvist
4. LAK Jonathan Quick
5. NJD Ilya Kovalchuk
Honorable mentions: Zdeno Chara, Boston; Claude Giroux, Philadelphia; Shea Weber, Nashville; Jason Spezza and Erik Karlsson, Ottawa; Henrik Sedin and Daniel Sedin, Vancouver; Pavel Datsyuk, Detroit; Pekka Rinne, Nashville.