Pittsburgh’s 4-3 loss to the New York Islanders Saturday night chalks up as their most disappointing loss of the season through 11 games.

Falling down 2-1 it looked like it was going to be another night where Tristan Jarry wasn’t going to do enough to put the Penguins in position to win. Then in the second period the tide turned.

Jarry had a spectacular second period two that was capped off with Evgeni Malkin tying the game at 2-2 with 15 seconds left in the second period that saw the Malkin line turn defense into offense just inside the Isles blueline. Momentum continued to carry the Penguins way in the early moments of the final frame as Jake Guentzel put the Penguins up 3-2, just 3:19 in the third.

The way the Penguins started to take the game over in stretches, especially the top line that dominated in every facet, it was a game you have to find a way to finish.

But, a abysmal defensive breakdown by Kris Letang opened the door for the Islanders comeback.

The Cal Clutterbuck game tying goal at the 8:23 mark of the third period was an inexcusable breakdown from Letang. It just can’t happen in that situation.

For Pittsburgh you had the matchup you wanted. Your 4th line up against their 4th line favors New York but the Penguins had their No. 1 pair on defense out there.

It was textbook 101 on what not to do as a defenseman. On the Clutterbuck goal, here comes Kris Letang doing Kris Letang things as Pierre-Olivier Joseph and Letang both get caught behind the net and it’s suddenly a 3-3 game. 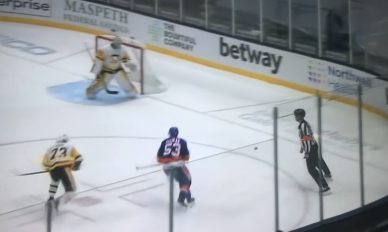 Pierre-Olivier Joseph is the left D on the pair and has clear 1-on-1 coverage against Casey Cizikas. For starters this is Joseph’s side of the ice to defend and Letang’s job is to defend the front of the net and protect the weak side post (Jarry’s blocker side) if Cizikas were to carry the puck around the net.

What is so maddening with Letang’s defensive game is that the light rarely turns on in his head when it comes to his defensive awareness. There was no read and react from him. He was chasing the puck carrier no matter what even though he’s the right D and it was going to take him completely out of his proper lane. 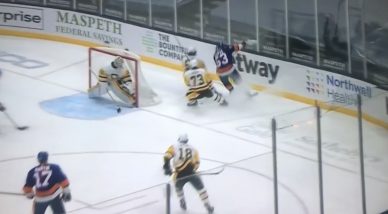 If the roles were reversed and Pierre-Olivier Joseph makes that mistake, you can live with it. That’s a rookie defense just getting his feet wet. Letang is just a different story. It is still something on how he’s never been able to eliminate mental mistakes like this that have haunted this team season after season.

The loss also comes back on the shoulders of Tristan Jarry as the game winner leaked through Jarry. Almost every game Jarry has played in this season, the Penguins have had the inferior goaltender. The team could be looking at a major problem in the present and future. Let’s not forget, scouts for the longest time had viewed Jarry’s ceiling being a high-end No. 2 goaltender. Lot of time to go but it’s not wrong to start wondering if that is who he really is, while Rutherford & Co got duped on last year’s hot run Jarry had in the first half of the season.

At the end of the day Pittsburgh’s General Manager search will be about who didn’t want the job and who the Penguins couldn’t pursue for various reasons. No matter how they spin it, they are not getting the person they really wanted.

The search now heads to an interesting stage.

Monday will start the next wave of second interviews for around five select candidates, while the Penguins could also bring in as many as 2-3 new candidates to the table for their first interviews, multiple sources tell TIOPS. Might sound confusing but that’s what is at play here.

High ranking sources confirm the Penguins have conducted eight official interviews for the GM position, while there’s been mid-level talks with a few other individuals about prominent roles to run the hockey operations. For whatever reason, these discussions are not being labeled as official interviews.

The belief around the league is the Penguins plan to get a GM in place first, some talk the team hopes to move fast enough this week where an offer to a candidate could happen as early as this Friday, then make a decision whether to hire a President of Hockey Operations or not by the spring or summer where if the Penguins went this route, the President of Hockey Operations would inherit the new General Manager To read this insider news, subscribe to get “Inside Access”!

Disgusting hextall to Pittsburgh a guy that played vs the penguins

Looks like Hextall will be the next “GM.” I hope he goes to make a trade, Mario says no and they fight.

Npl suckss
So does his kind

7 more games cancelled. This season is turning into a joke.

Well I said it most probably season would be canceled. Greedy clowns couldve just started the season September 2021

I heard they made cut the season to 4o games…..doubt that will happen.

I got to credit the NFL how did they make it work? outside an early season issues in Tennessee and Baltimore the positivity rate was 0.8 %

Football is easier to control. One game a week. Completely different animal.

Im curious if Letang has any trade value at all. An aging defensive idiot unable to QB a powerplay at an expensive AAV is a tough sell.

At this point, trade his cap hit and use the space to take on bad contracts for picks. You could either have him and his hideous contract playing 20+ minutes a night with no futures, or have other scrubs with bad contracts buried in the lineup with some extra picks.

Id wait to see if JR gets a new GM spot somewhere. He’s good for a lopsided salary dump.

He wanted to trade both Malkin and Letang, upper management said no. I would have quit too.

Letang for sure was to be traded there was a deal in place to the Montreal Canadiens (Until Lemieux nixed it)..
Malkin I don’t think so

He is only under contract for one more year. If they manage to trade him it will probably not be until the off season or if some playoff team needs someone to ensure they don’t win a cup.

Aren’t Letang and Malkin up after next year ? If they resign either of them they are stupid..

$1.75 million can get you alot of talent to surround Sid with…just saying

One more year would be next year.. =)

There was a deal i place for him to Montreal…he is that French Canadian kid.

Then suddenly Rutherford resigns…so there is one team

Letang can still skate well and hasn’t lost much there. He just has zero between the ears and consistently makes bonehead mental mistakes…

I hope the pens do bring st bleury back. He deserves to sink with this ship too.

No he doesn’t I said it the minute he is gone he will do good elsewhere. People like you never appreciated him
When team won it was always sid and Co when they lost blamed in MAf when fleury stole a lot of games and series for the team when fraud murray never even stole 1 game for the team. Team just played good in front of him.

Great playoff numbers, but obviously it was everyone else’s fault (Letang is always excluded) but his. Even when they won the cup in 09’ he was outplayed. Give up the ghost.

WOW seeing some of these highlights from last night Letang is abysmal. He leaves men wide open in front of the net.. He chases guys behind the net…shit you don’t even do n pee wee hockey..

So what you are staying is basically the whole team sucks. Lol

And bc Tortz is not afraid of his star players.

Torterella and Trotz neither one is afraid Sully has this blind loyalty….

Trotz sat Ovie for being late to a meeting. Letang should be benched for showing up to games.

The way he has been playing, I have no problem with that. Unlike you, I will admit it.

Russian has been garbage more then letang. He led the penguins in the penalty department also for 4 or 5 season in a row despite his 20 games annual vacations he takes. 9.5m Goon

And yet ever year he has been a point per game player minus one year when he missed it by 6 points. He is slowing down and maybe it’s time to move on but they should have moved on from Letang after they won the cup without him. They looked better without him. Malkin really did not start looking bad until playoffs last year.

He always did bad but his PP covered his bad games

Shitt you are such a troll…

And nothing covers Letang’s bad games.

WELL KIND OF…LOL This is fixable..they are holding on to the last playoff spot – Move Letang to third pair defense and send a clear message…next move is the press box new gm make a couple solid moves to better the defense.. add a 3rd line center Blueger isnt a 3rd line center sorry -move Marcus Pettersson to Winnipeg for Matthew Perreault 3 assists the other night. The money is even and Perreault can fly, has some edge and a good shot. Give the Blues or Canadiens or second round pick for Vince Dunn 24 or Victo Mete 22 help… Read more »

agreed bench his ass..or put him on the 3rd pairing and off the power play…

Sully needs to start benching players. Start with Letang! He is making Ceci look like a Norris candidate.