The mediocre NL Central is keeping things interesting and despite being a game under .500, the Pirates could be playing meaningful baseball for the next five to six weeks.

After losing eight of 10, the Pirates have countered that by winning five of six and currently on a three game winning as the four game interleague series with the Tigers shifts to Detroit for two games.

The Cubs just a week ago looking like they were primed to begin their ascend of start running away from the division, have hit a road block and lost five of seven.

The Cardinals meanwhile have won four straight and now trail the division by just 2.5 games. 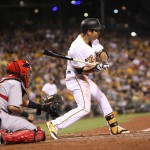 — The Pirates requiring Sean Rodriquez caught many by surprise because he’s owed $6.5 million in 2018 and with the Pirates there’s the always what does this acquisition mean for next year with the payroll.

Having three versatile players in Rodriguez, Josh Harrison and David Freese combine for $20.75 million in actual cash next season might not look ideal for how the Pirates operate but if the Pirates get Jung Ho Kang back, having Freese and Rodriguez are two of your primary bench players is a good situation to have and both are very well liked in the room.

Strictly for 2017, Rodriguez adds immediate value because he’s an upgrade over Max Moroff, he’s more versatile, and even if he doesn’t hit well over the rest of the season, he greatly improves the defense.  The acquisition, though, loses value for next season if adding Rodriguez salary means the Pirates [hide] will move a Freese or even All-Star Josh Harrison who garnered significant interest around the league prior to the deadline and other clubs believe Pittsburgh is inclined to eventually move Harrison as his salary rises to $10 million in 2018.

— If there’s been one surprise from the Pirates season, it’s the improvement of Trevor Williams.

Williams evolving into a quality back of the rotation starter is the perfect kind of situation for the Pirates where he’s 25 years old and improving, while making $544,000 this season and not arbitration eligible until 2020.

Williams has posted a 3.56 ERA over his last 16 starts and what the Pirates really like about him is how he thinks the game when on the mount. He’s very efficient at picking corners.

What the Pirates really needed this season was Tyler Glasnow arrive and start tracking towards a top of the rotation starter by seasons end but Williams has been a nice pleasant surprise and is trending in the direction where he’s going to be penciled in the 2018 rotation.

— The Pirates in the weeks leading up to the July 31 deadline, scaled back any plans of moving Andrew McCutchen and decided McCutchen’s future would become a winter thing.

Still, some club officials were surprised at the lack of calls on McCutchen prior to the non-waiver deadline.

Not one team came at them with a scenario that at least made them go back as a group to discuss.

Bad market for outfielders and clubs want to still see McCutchen in a corner outfield spot to properly evaluate him.[/hide]

It’s difficult to proofread the one blog per week that he writes.

His defense is needed when Williams is on the mount.