The Steelers hopes of going back to the days of having their two starting linebackers be 10+ sack a season players isn’t going to come to fruition.

2nd Year linebacker Bud Dupree who when on the practice field this summer never showed flashes of dominance, has been bothered by an abdominal/groin injury that makes sense for how he never looked right this summer.

Dupree will be sidelined for multiple weeks and has been officially placed on injured reserve/designated for return, meaning he can’t play for the first eight weeks of the season.

The hope is to put it off and go the rehab route. 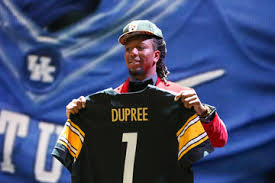 “Bud Dupree has been placed on IR, and he’s capable of being designated-to-return,” coach Mike Tomlin said. “He’s got a muscular core injury that he’s been battling over the course of the last several weeks. These things sometimes get better with time, and sometimes you can manage them. Sometimes they require a surgical repair of some kind. He’s being evaluated in the next couple of days to determine what route we’re going to take, but by putting him on IR, and potentially designated-to-return, we took the timetable off it and we just want to get him healthy. Hopefully, he’ll be back in uniform for us in 2016 and be the core contributor to our efforts he’s capable of being.”

The Steelers will start the season with Arthur Moats at LOLB and Jarvis Jones at ROLB. While wanting to monitor James Harrison’s snaps early in the season, the Dupree injury has opened the door for the Steelers to play Jones on the left side more than they imagined.

The wildcard of the group will be second year linebacker Anthony Chickillo who was one of the Steelers most consistent/dominant practice players during camp. His preseason play, though, was just average.

Tomlin contended today Chickillo will be part of the rotation.

“We’re going to play all four guys fluidly at two spots,” Tomlin said. “We got a great deal of confidence and ability of all four guys who are candidates at the position.”

hey depaoli, where are the world cup of hockey articles? it’s time for the prohpet yoda to speak.

thanks for the update on the disabled comments. i can go anywhere for news; i come here for the personal service.

There are a lot of idiots out there, but there’s only one Sam.

In the words of the late great beerman, what the foc is going on with the comment sections vanishing around here?