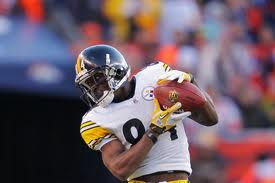 STEELERS 27 – BROWNS 11
The Pittsburgh Steelers (5-6) are stacking some wins together, earning their third straight win with a convincing 27-11 win over the Cleveland Browns (4-7). Pittsburgh had total control of the game and have emerged as serious threats for the final wildcard spot in the AFC with five games to go.
The Steelers are now 5-2 in their last seven games and the next two games are huge. They are in Baltimore Thanksgiving night to play the 5-6 Baltimore Ravens in a game that will mean a lot for both teams after all and then the Steelers host the Miami Dolphins (5-6) at home on December 8th.
The Steelers, Dolphins, Chargers, Ravens and Jets are tied with 5-6 records for the final wildcard spot. Pittsburgh right now has the head to head tiebreaker with the Ravens and Jets. The 4-6 Titans and 4-6 Raiders are facing each other at this moment. The winner will move into the No. 6 playoff spot due to tiebreakers.
Of the remaining wildcard teams, the Steelers have the best QB but that doesn’t mean much. Case in point the Steelers lost to Terrell Pryor, Jake Locker and Matt Cassel this season.
Here are some key takeaway’s from today’s 27-11 win
— The game turned in the Steelers favor in the second quarter. In the first quarter it was a battle of screen passes between both teams as both offenses came out very conservative. The Browns dared the Steelers to throw deep and Antonio Brown made them pay, beating Joe Haden deep for a 41 yard score on a pass that was slightly under-thrown but Brown had that much separation from Haden to haul in the catch and get full control as he went down in the end zone.
— Antonio Brown again quieted his critics who claim he’s not a No.1 receiver, hauling in 6 catches for 92 yards and 1 touchdown. Brown went over 1,000 receiving yards on the season and now has 80 receptions for 1,044 yards and 6 touchdowns.
— You don’t have to look far to wonder why the Steelers are back in the hunt. The Steelers are getting takeaway’s and not turning the ball over. Pittsburgh won the turnover battle 4-0 today. The Steelers defense had one pick six, three forced fumbles/recoveries, and five sacks.
— Improved pass rush has also been a huge key in the Steelers resurgence. Jason Worilds and Cam Heyward have been big factors. Worilds was a beast today with 5 tackles, 6 QB hits and I had him down for being in on 8 QB pressures. It was the best game from a Steelers OLB in a while. There’s no reason why LaMarr Woodley should be handed his starting job back. Go with the young guys.
— Reasons for optimism: Troy Polamalu is playing his best football in years just at the right time. Throw out the New England game and he’s had a pro bowl type season.
— Reasons for Concern: Ike Taylor showing his age and has been torched the last two weeks. He has given up over 400 yards the last two games on passes thrown his way.
By the Numbers
QB Ben Roethlisberger 22/34 – 217 yards – 2 TD – 0 INT – 102 QB Rating
RB Le’Veon Bell 23 CAR – 80 Yards
WR Antonio Brown 6 REC – 92 Yards – 1 TD
WR Emmanuel Sanders 6 REC – 52 Yards – 1 TD
TE Heath Miller 5 REC – 41 Yards
LB Lawrence Tummons – 7 Tackles (Team high)
LB Jason Worilds – 5 Tackles, 6 QB hits
DL Al Woods – 4 Tackles, 2 Sacks, 1 TFL
DL Cam Heyward – 2 Tackles, 1 Sack, 1 Fumble Recovery
CB William Gay – 3 Tackles, 1 sack, 1 INT (TD)
SS Troy Polamalu – 4 Tackles, 1 Sack, 1 Fumble Recovery
FS Will Allen – 3 Tackles, 1 Fumble Recovery