Market picking up for Freddy Sanchez 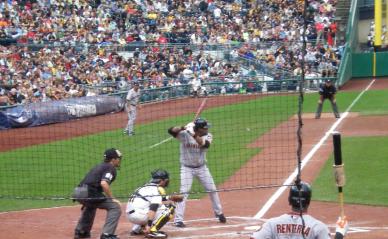 The San Francisco Giants are regarded as a great fit for Pirates second baseman Freddy Sanchez but the Giants have some conpany in their pursuit of Sanchez.
An NL Central team and two AL teams have recently held trade discussions with the Pirates about Sanchez.
Barring a break through in contract negotiations, All-Star second baseman Freddy Sanchez will be traded before the July 31st deadline.
Inside baseball circles, the San Francisco Giants are regarded as the perfect fit for Sanchez.
Being a gap hitter, Sanchez would excel playing in the Giants ball-park.
The Giants have also discussed making a play for Zach Duke.
Giants pitcher Jonathan Sanchez (3-8, 4.37 era) recently threw a no hitter and has been linked to Pittsburgh but recent reports indicate they want to hold onto him.
A team that has been lurking for months has been the Chicago Cubs. With their ownership situation solves, the Cubs need a top of the order presence and as recently as this week have held talks with the Pirates.
The Pirates have been eyeing Cubs prospect Jay Jackson (5-4, 3.37 era). Jacksons fastball hits 94 MPH and is expected to be Major League ready by 2010.
Two AL teams are also in the mix at this time; The Seattle Mariners and Minnesota Twins.
The Twins interest has cooled because of Sanchez’s option but they haven’t closed the door on making a run at him.
The Mariners and Pirates have held a number of talks over the past month.
Marc DelPiano, special assistant go Neal Huntington was scouting a Mariners game on July 9 and this week Larry Corrigan, a special assistant to GM Neal Huntington, was in Detroit scouting the Mariners.
The Mariners are 5GB of the wild card and have been linked to Jack Wilson and Freddy Sanchez.
Talks regarding Sanchez have centered around the Pirates receiving a Major League ready player in return but sources tell me the Mariners have also been eyeing a starting pitcher off of the Pirates roster.