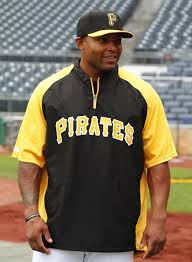 BYRD AN OFF-SEASON PRIORITY FOR PIRATES
Marlon Byrd is baseball’s best bargain at $700,000 and at age 36 he will be one of the more interesting free agents from the standpoint of what his market worth will be. Word already inside the Pirates organization is that the team will make an attempt to sign Byrd but will the Pirates be willing to go beyond one year?
One MLB Source predicted Byrd will likely command a two year deal in the $12 million range and possibly net a three year deal in this market. Two to three years is very risky for Byrd who has a long list of injury history.
Look for the Pirates to try to resign Byrd for 1 year at around $6 million per with a club option for 2015.