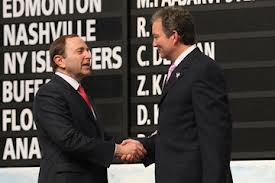 MORNING PENS BUZZ
Watching Brandon Saad just dominate vs the Kings in Game 5 on Wednesday night, it had to make Penguins fans sick to their stomachs. Three years later, the 2011 draft has ended up being a draft that set the Penguins back. In selecting defenseman Joe Morrow, Shero and his scouting staff not only had passed on Saad and potential star goaltender John Gibson who were in his backyard, Boone Jenner sure would have looked great this season next to Malkin or Crosby, wouldn’t he?
The worst thing about by-passing Saad is he plays the perfect type of style for a Dan Bylsma system, the so called “Penguins Way” so many in the organization call it.
Yet, the Penguins didn’t give any consideration to drafting Saad as their decision came down to Morrow or defenseman Scott Mayfield.
Shero was quoted in the Tribune-Review prior to the 2011 draft as saying Brandon Saad had “all the tools.” Here were Shero’s exact quotes on Saad to the Trib’s Josh Yohe. “Brandon Saad is going to be a good NHL player eventually,” Shero said. “Great kid. He’s got all the tools. I’m very impressed with him.”
I was told at the time that the Penguins had some character concerns about Saad and that he was immature. That kid is mentally tougher than just about any Penguins player on their roster right now.
The troubling thing as one source close to the situation said of Shero is that Shero might of only saw Saad play once in the year leading into Saad being drafted, and maybe not at all to his knowledge.
Word is certainly buzzing that one thing Penguins ownership wants out of their next General Manager is for the GM to be more active in scouting young talent, notably amateur draft eligible players. Shero was rarely active in scouting amateur players and relied a bit too much on his own amateur scouting staff and didn’t have his own first hand information.
The Penguins miss in Round 1 of the 2011 draft has arguably set the Penguins back. How different would the Penguins forward group look with a young impact do it all player in Brandon Saad who Chicago coaches feel is a young Marian Hossa, playing on a line with Evgeni Malkin?
Or how would things look with a potential franchise goaltender in John Gibson ready to lead this Penguins club next season.
Every team has misses in the draft but when you’re an organization whose highest scoring forward among draft picks since 2007 is Dustin Jeffrey, who isn’t even an NHL player or with the organization, you can’t blame it on bad luck.
BAD DRAFT PHILOSOPHY
The fixation of the Penguins drafting defenseman has led to a situation of what might have been when it comes to the 2011 draft, but when you break down the Penguins drafts under Shero, it’s simply amazing the Shero regime didn’t hit on one mid-to-late round pick when it comes to that player already contributing at the NHL level.
Since the 2007 draft, among the final four teams left in the post-season, now down to three, each team has a significant or significant contributors who were late round picks.
In New York, they hit big on Carl Hagelin who was drafted in Round 6 of the 2007 draft. Chicago there’s Andrew Shaw who was drafted in Round 5 of the 2011 draft and is an impact player for Chicago. Ben Smith taken in the 6th round of the 2008 draft, has also been a key contributor for the Hawks this post-season.
The Kings have a number of draft picks since 2007 being key contributors and Montreal has hit it big with late picks, nabbing Brendan Gallagher with the 147th overall pick in Round 5 of the 2010 draft. Pittsburgh picked seven selections earlier, taking Kenny Agostino at 140 overall.
One NHL source told me he feels the Penguins have been too fixated on drafting college forwards in the mid to late rounds and most times these players need 4-6 years to develop, where as a player like Andrew Shaw was playing in the NHL within a year of being drafted after coming out of juniors.
KINGS IDEAL MODEL
Whether the new GM ends up being Julien BriseBois or Jason Botterill, the two leading contenders, or another candidate, the LA Kings model is the perfect type of model to want to build.
Around the core of their team, Anze Kopitar, Drew Doughty, and Jonathan Quick, Kings GM Dean Lombardi has made a significant trade in adding Jeff Carter, and a few other key ones, but a lot of the surrounding cast is through the draft.
Out of their draft choices since the 2007 draft, Los Angeles had 8 regulars in their lineup during the regular season and seven are big contributors right now in the post-season.
FORWARDS
Tanner Pearson, 2012 1st round pick – Second line winger, 4 goals and 12 points in post-season
Tyler Toffoli, 2010 2nd round pick – Second line winger, 6 goals and 11 points in post-season
Dwight King, 2007 4th round pick – Had 15 goals during regular season
Kyle Clifford, 2009 2nd round pick, Big, Strong, role player
Jordan Nolan, 2009 7th round pick, Role player with upside, appeared in 64 games during regular season.
DEFENSEMEN
Drew Doughty, 2008 1st round pick – arguably one of the NHL’s top defenseman
Slava Voynov, 2008 2nd round pick – High upside defenseman, leads all Kings defenseman with 61 hits in 19 playoff games.
Alex Martinez, 2007 4th round pick – Strong defensive minded third pairing defenseman.
You can add Jake Muzzin to this list. He was the Penguins 5th round pick in 2007 but Shero and his staff decided not to sign Muzzin as they were not high on him. Muzzin signed with the Kings in 2010 and is now a top pairing defenseman with Drew Doughty.