Morning Skate Buzz: Eaton taking part in skate as Penguins want to give him a look with NHL guys for a “few days” 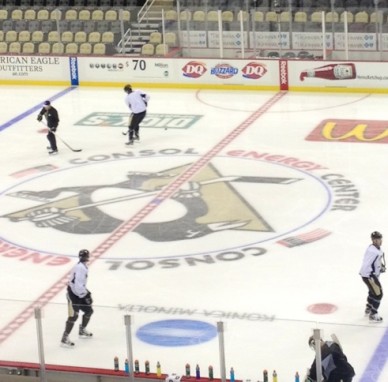 Defenseman Mark Eaton who was officially released from his PTO with Wilkes Barre is taking part in today’s skate.
Eaton has not been signed yet by the Penguins but an NHL source says you could say Eaton being with the team “is an extension of the tryout”. The Penguins want to give Eaton the opportunity to skate with the NHL guys for a few days and see how it goes for both sides, sources say.
It appears something could be in the works and the Penguins haven’t ruled out signing Eaton is the word I’m getting.
Here were the lines in the morning skate.
LINES
Chris Kunitz – Sidney Crosby – Pascal Dupuis
Matt Cooke – Evgeni Malkin – James Neal
Beau Bennett – Brandon Sutter – Tyler Kennedy
Tanner Glass – Joe Vitale – Craig Adams
Extras: Dustin Jeffrey, Zach Boychuk
TOP POWER PLAY UNIT: Paul Martin and Kris Letang each alternated with the top unit. Martin opened up the power play session running the point then after a bit, Letang moved to the top unit and Martin to the second unit.
Starting Goaltender?: Word is Tomas Vokoun is getting the start. Will update in a bit