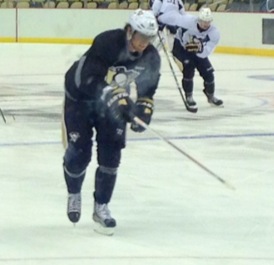 WEDNESDAY’S PENS BUZZ
James Neal’s status for tomorrow night’s opener against the New Jersey Devils is up in the air. Neal who left practice early today, is listed as day to day with an upper body injury. Head coach Dan Bylsma said after practice the injury didn’t happen today and Neal came out to test it.
If Neal is unable to give it a go, Evgeni Malkin figures to center Jussi Jokinen and Beau Bennett on the second line.
The Penguins planned to start Jokinen on left wing with Malkin and Neal and use a third line of Beau Bennett – Brandon Sutter – Chuck Kobasew.
MORE LINEUP BUZZ FOR THURSDAY NIGHT