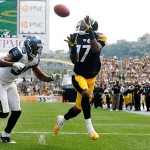 SEAHAWKS TO GO HARD AFTER WALLACE?
Some rumblings among agents and executives down at Super Bowl Week have Mike Wallace being coveted in the NFC West.
Two agents I spoke with this morning who were down in New Orleans this past week both said buzz among NFL executives is the Seattle Seahawks intend to go very hard after Steelers WR Mike Wallace who will hit the open market in March as the Steelers don’t plan to franchise Wallace.
Is Wallace also at the top of the wishlist for the NFC Champion San Francisco 49ers? Yes he is.
There is talk that Wallace is also expected to be high on the 49ers wishlist with word going around that the 49ers covet a big play wide receiver with top-end speed to compliment No. 1 receiver Michael Crabtree. The 49ers briefly looked into Wallace last year as a restricted free agent but balked at the asking price.
The sense is Seattle, though, has the greater chance of throwing Vincent Jackson money at Wallace, which is what he’s seeking as Wallace eyes over $25 million in guaranteed money.
Wallace is regarded in league circles as the top free agent receiver with Dwayne Bowe and Greg Jennings. Wallace is the younger of the two at 26 years old, compared to Jennings who is 29 and Bowe 28.