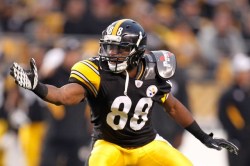 LATEST ON EMMANUEL SANDERS
The NFL Trade Deadline is October 29th, and while this is not their style, the opportunity is expected to be there where the Steelers could move Emmanuel Sanders for at least a 2014 third round pick.
Sanders a free agent at seasons end, seeks an Antonio Brown type contract and the Steelers have no plans to resign him for what he’s looking for.
Those in league circles believe the New England Patriots would have interest in trading for Sanders. The Patriots this past off-season signed Sanders to an offer sheet and the Steelers matched.
Other teams looking for receivers include the San Francisco 49ers, Detroit Lions and Cleveland Browns.
The Steelers will have played seven games by the deadline and if they are 2-5 or worst, Pittsburgh should strongly consider getting a second or third round pick for Sanders as the Steelers wouldn’t net a compensatory pick for Sanders until 2015.