NHL: With something “missing” in the room, Penguins looking to bring back Sergei Gonchar as a stop-gap option? 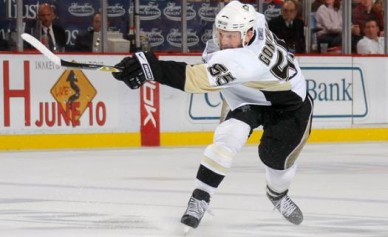 BREAKING DOWN LATEST ON SERGEI GONCHAR
From Bruce Garrioch of Ottawa Sun: “If the NHL does start a shortened season next month, don’t expect Sergei Gonchar to finish it with the Ottawa Senators. The veteran defenceman, going into the final year of a contract paying him $5.5 million per season, will be targeted for a trade by the Pittsburgh Penguins once a collective bargaining agreement is reached.
Whether Gonchar’s former team waits until whatever date is set for the trade deadline or a makes a pitch before the season begins isn’t known, but league sources say Pittsburgh GM Ray Shero has interest in bringing back the 38-year-old.
The Penguins never wanted to lose Gonchar in the first place when he signed a three-year, $16.5-million deal with the Senators on July 1, 2010. Shero wouldn’t give Gonchar the additional year he wanted on a new deal.
While Gonchar struggled to make a contribution during his first season with Ottawa, he had a strong second campaign and chipped in offensively with five goals and 32 assists in 74 games.
The Penguins now want his veteran leadership back in their dressing room.”
DePaoli’s Take: Garrioch plenty of times has some rumors out of left field but there has been some rumblings going around since the summer where the Penguins had been discussing Gonchar internally. When the Penguins explored trading Zbynek Michalek to Ottawa (to give him the chance to play with his brother), the Senators and Penguins briefly discussed a deal that would have sent Gonchar, draft pick and a prospect to Pittsburgh for Michalek. The Penguins looking to open cap space for a run at Zach Parise and Ryan Suter balked at taking on Gonchar’s salary at the time.
If there’s hockey next month, the NHL is proposing a salary cap of $59.4 million with a transition cap of $70 million for 2012-2013. The Penguins would have approximately $7.5 million in cap space for this season.
Here’s the thing that caught my attention from Garrioch’s report: “The Penguins now want his veteran leadership back in their dressing room.”
I constantly heard from team sources this summer who strongly felt “something was missing” in the room. It wasn’t bad a group of players from a character standpoint but they have felt something was just missing.
With struggles to land a top-pairing defenseman this past summer and none expected to be available for trade when the season begins, Penguin scouts still think Gonchar can play in a second pairing role I’ve been told and bringing him into the room as a stop-gap option will likely intrigue the Penguins if the cost to acquire him is low, based on what I was hearing a few months ago.
Gonchar is best friends with star forward Evgeni Malkin who would love to see Gonchar back.
Whether the Penguins have a strong interest to target Gonchar immediately when (if) the season begins like Garrioch thinks, remains to be seen. GM Ray Shero has been intrigued to see how his blueline shakes out that has a lot of question marks and would the Penguins want to tie up cap space in Gonchar when the trade deadline could see the likes of Jarome Iginla become available? However, I’m not surprised to see Gonchar’s name popping up.