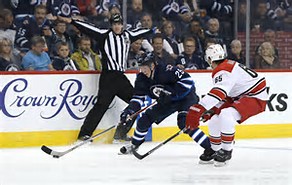 The Pittsburgh Penguins eyeing a Ben Lovejoy type defenseman to bolster the PK, have acquired defenseman Ron Hainsey from the Carolina Hurricanes. According to Ren Lavoie of TVA Sports, the Hurricanes will receive a second round pick and minor leaguer Danny Kristo.

Additional details of the trade:
*The Penguins will send a 2017 second rounder to the Hurricanes.
*Carolina will retain 50% of Hainsey’s $2.83 million cap hit.

Jim Rutherford is familiar with Hainsey, having signed him during the summer of 2013.

The 35 year old Hainsey is a free agent at seasons end. Hainsey has played in 891 career NHL games without appearing in a playoff game.

For the Penguins, defenseman Olli Maatta is out for most of the regular season due to hand surgery and defenseman Trevor Daley will miss six weeks due to knee surgery, the team announced.

Defenseman Justin Schultz out with a concussion, has been cleared to practice and could return Saturday night vs Philadelphia.

If Letang is out does that mean he’s still on the first PP unit?

Sweet! When didn we acquire Bimini?

I’ve heard from an inside source in hockey circles who has been speaking with those in the know that Center Nick Bimini was back on the ice today at practice.

trade letang at the deadline. these injuries are only going to get worse with age!

What a brittle pusssy frog. Hey sam – your lover is hurt again.

there is no market for saint bleury. who told you that? #everyonewantsa6milliondollarbackup

You also said he had a huge dick.

Hainsey is a good PK player. And Canes were #1 PK team in the league. So that is a plus I guess. He’s ranked 12th best PK player in the NHL this year.

I think he will help, but I wonder if he’s worth a second. There’s a lot of talent in the second round and statistically, it isn’t much harder to hit on a player in the second round than towards the end of the first. We could certainly use someone like him though, so hopefully it works out.

The weak draft is the only solace in giving up a #2 for a 35 year old pending UFA.

at least they didn’t give up two two’s…

I wonder how npl feels about the transgender bathrooms

Well pens got a nice 36 year old
Might as well try to find and get scuderi so he can shut down ovechkin in the playoffs and teach some defense to letang. Remember stain

I mean, that presumes Letang plays – which is a leap in and of itself.

Sam will just shut the hell up. You contribute nothing to these comments and it’s pretty obvious you’ve never actually been to a live game in your life.

Certainly not without his mom paying for the ticket.

In fairness Hainsey has always been pretty steady. Playing in Carolina probably did him no favours. I will reserve judgement until I see him play the Pens system and hope that the lack of playoff experience is not gonna matter. Based on the overall depth it probably shouldnt

He was onenpkayer who would consistently go into the corners to win the puck battle.

Adds some size to our team too. Never played the playoffs but that could be extra motivation too

Hainsey is a big dude who will clear the front of the net and go into the corners.

Players don’t clear in front of the net anymore it’s a sisi league.

What does the president of Egypt have to do with the NHL?

Had a feeling Hainsey would be on the Pens. They were pointing him out the other night and talking amongst the coaches after pregame warm ups.

I’m not Kingspuck you fool. I was around when he was on this board and all you guys are up his info. Not everyone can be an insider.

Well they have been using draft picks as a currency for quite awhile now sooo… this shouldnt be too shocking really. Not to mention the fact that they are down 4 regulars… they may have felt they had to make a deal

Stone 26 Hainsey 36 and more expensive . Must be the fact he is American that’s why

Must be your favorite site donut boy

We know it’s your favorite site – it’s the one you use to pretend you know something, portraying their articles as your own. Which has always been funny, you fat tab or goo.

Whatever makes you happy. Now go back and make some Donuts Chubby

Do you think it’s funny that you make that comment, while I could literally give you a raise by making you my gardner?

With both Maatta and Daley out until the playoffs, the Pens are trying to create as much cap room as possible.

Also at least points in the direction that they have other moves they want to make, or at least flexibility to explore them.

Hahahaha haineys is the new name.look idiot stain he made an error. Oh forgot agenda is only targeted in Sam. Go fuckk yourself moron and choke on a donut

LOL, you’re an insufferable asshat. This is why you are “targeted”. Even as the conversation has moved more toward hockey talk the last few days you continue your schtick. Fuckkoff

Is he on his last year of his contract? Is so then he is expensive for a 36 year old

The price was high but I’m fine with it. We needed a capable defensemen in the worst way. Especially with the rumors that Daley is getting surgery.

Officially now, per the Pens – out 6 weeks.

Think they wanted to get this done before it’s announced Daley is out for the season.

I thought so too. Looks like Danny Kristo is the “prospect” going the other way, if you can call him that. I remember when he was a decent prospect – now he’s AHL junk, that I didn’t even know the Pens had acquired.

I’d have rather had Stone for a 3rd and a 5th I think. 2nd round pick seems awfully high for a #5/6 rental. But it certainly addressed a need.