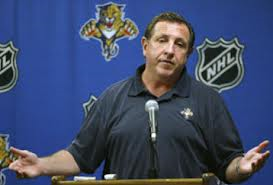 The Pittsburgh Penguins have made an interesting coaching hire for the organization.
The team is hiring defensive minded coach Jacques Martin. Martin, 60, was formerly the head coach of the St. Louis Blues, Ottawa Senators, Montreal Canadiens and Florida Panthers. Martin has a career coaching record of 613-481-199.
Martin is widely known for installing defensive discipline and getting the most of young players. He’s been highly regarded for years around the NHL for his defensive structure.
Martin has ties to GM Ray Shero dating back to Shero’s time with the Ottawa Senators and also has ties to assistant director of amateur scouting Randy Sexton who was in the Florida Panthers front office when Martin was head coach.
Martin is also a former GM and is expected to play a role in the organization beyond just being an assistant coach.
The Penguins far from a great defensive team, have no true defensive minded coaches on their staff.
Assistants Tony Granato and Todd Reirden each received two year extensions this summer along with head coach Dan Bylsma.
Bylsma’s two year extension pays him around $2 million per season, making him one of the NHL’s highest paid coaches.