Penguins improve to 6-0 on the road; beat Blue Jackets 4-3 in SO 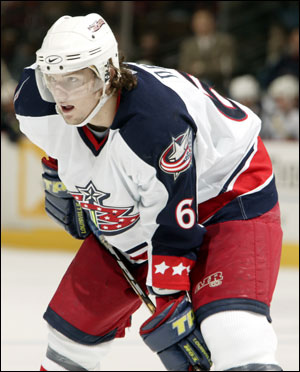 Pittsburgh 4 – Columbus 3
Through 13 games, the Pittsburgh Penguins continue to find ways to win in any fashion. Tonight it was erasing a two-goal deficit with less than three minutes remaining in regulation.
Down 3-1 late in the third period, Ruslan Fedotenko and Alex Goligoski scored in a 39-second span to tie the game at 3-3 and force over-time. After a scoreless shootout, backup goaltender Brent Johnson went 3-for-3 in the shootout and Sidney Crosby scored the only goal as the Pittsburgh Penguins defeated the Columbus Blue Jackets 4-3 Friday night at the Nationwide Arena.
Pittsburgh improved to 11-2 on the season and 6-0 on the road.
Crosby led the way for the Penguins with two assists and scoring the shootout winner which was a fluky goal that eluded goaltender Steve Mason.
“It was kind of a fluky. The puck kept going,” Crosby said, describing his shootout goal. “I don’t know if he lost it or he didn’t know where it was or whatever. I just tried a quick shot. I thought he had the save there. It just trickled in.”
Blue Jackets goaltender Steve Mason talked after the game that he couldn’t believed the puck went in.
Pittsburgh got another strong performance from goaltender Brent Johnson. Johnson stopped 29 shots and is now 10-2-2 with a 2.09 GAA in 14 career games against Columbus.
Penguins General Manager Ray Shero didn’t make any major moves in free agency, but he made three under-rated signings in adding forward Michael Rupp, defenseman Jay McKee and goaltender Brent Johnson.
Chris Kunitz added a short-handed goal for Pittsburgh. Kunitz has goals in consecutive games after scoring only 2 goals in 41 games prior to Wednesday night’s game.
For Columbus, they continue to struggle to finish off games. “We’re not closing games,” Rick Nash said. “We got the lead in a lot of the games already and just can’t seem to close it out. They are the defending Stanley Cup champions. You can tell why they’re such a good team. We are a team that needs to learn how to play with the lead.”
Nash led the Blue Jackets with two goals on the night.
Pittsburgh returns home Saturday night against the 4-9 Minnesota Wild.
Around the Rink
*Forward Chris Conner made a good first impression. Conner provided energy and was making things happen. He will be in the lineup again on Saturday.
*Mark Letestu will join the team tomorrow morning. The team will have an optional skate and will conduct a team meeting at 11:30 a.m.
*Tyler Kennedy remains sidelined and will not play against Minnesota. Kennedy did not travel with the team.