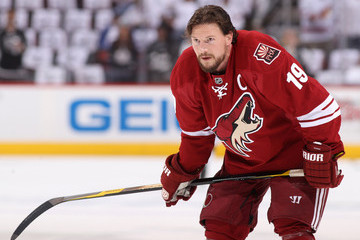 Coveted veteran forward Shane Doan is slowly inching closer to making a decision on his playing future. Doan after visiting the Vancouver Canucks on Tuesday night, the third team he has visited, has trimmed his long-list of suitors (15+) down to four teams (5 teams in total including Phoenix) outside of Phoenix, with the hopes of possibly making a decision next week so his kids can get settled for school, sources close to the situation told Inside Pittsburgh Sports.com on Thursday afternoon.
The Pittsburgh Penguins who have a three year offer on the table believed to be just north of $14 million, have made Doan’s short-list of the “top four teams” he is considering, an individual directly involved in the negotiations said. The New York Rangers and Vancouver Canucks both teams Doan has visited, are also on Doan’s shortlist the source confirmed. However, we can’t confirm the fourth team at this time.
Doan’s three visits have been with New York, Philadelphia and Vancouver, so it’s possible that Philadelphia is the fourth team but whispers around the league for weeks has been, don’t sleep on the San Jose Sharks emerging as a front runner for Doan.
The Sharks, Los Angeles Kings, Sharks, Buffalo Sabres, Montreal Canadiens and Detroit Red Wings all made offers to Doan. Out of that group, Buffalo, Los Angeles, Montreal, and Detroit are regarded as longshots to be on Doan’s shortlist of teams.
If Doan leaves Phoenix, New York and Vancouver have been regarded as more likely landing spots for Doan than Pittsburgh, although a source says the money being offered by all three teams is in the same ballpark. Doan lives in British Columbia during the summer.
Doan for a soon to be 36 year old, has received at least two massive four year offers worth over $24 million but those offers have been coming from rebuilding teams and non-Cup contenders, Inside Pittsburgh Sports has learned.
However, a sign that the Penguins might really be a longshot, is that after cancelling a visit to Pittsburgh last Friday (July 27th) as Doan decided to wait for information from Greg Jamison last weekend as the City’s extension was set to expire on July 31, Doan has not rescheduled a visit to Pittsburgh as of this afternoon, despite daily contact between agent Terry Bross and Ray Shero. A source said Doan might still visit with Pittsburgh but hasn’t decided if he intends to travel across the country again.
Meanwhile, despite Greg Jamison still not having the money to close the deal with the Phoenix Coyotes, Doan hasn’t officially closed the door on returning to Phoenix just yet as Jamison was given another 30-day extension and looking to bring more investors on board. A return to Phoenix though is looking like a real long-shot for the first time since free agency opened up.