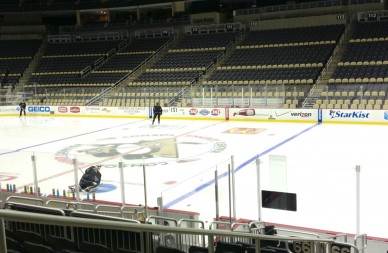 Matt Niskanen (ankle) is out of the lineup tonight and Simon Despres will return to the lineup. Despres who has been a healthy scratch for the last two games, will be paired with Kris Letang.
An interesting dynamic with Despres is whether his confidence is shaken. In our grades, he graded out better than Deryk Engelland with his play over the first three games and his play overall was not all that bad.
Head coach Dan Bylsma has been feeling that Despres has lacked consistency, which led to his scratch.
Despres making the team out of camp and the team waiving Brian Strait was strictly a coaches decision who had wanted Despres to open the year in the top-6.
LINES
Kunitz – Crosby – Dupuis
Kennedy – Malkin – Neal
Glass – Sutter – Cooke
Tangradi – Vitale – Adams
Jeffrey extra
DEFENSEMEN
Despres – Letang
Orpik – Martin
Engelland – Lovejoy/Bortuzzo
Tidbits: Prior to the morning skate, assistant coach Tony Granato spent a good five to seven minutes working with Robert Bortuzzo in individual drills. I would like to see him get a shot at somepoint. Bortuzzo rotated regularly with Deryk Engelland and Ben Lovejoy which normally isn’t the case……Eric Tangradi is seeing some time with the second power play unit as is Dustin Jeffrey.
Updated: 11:05 – Marc Andre Fleury is getting the start in goal.