Penguins Notes on Crosby, Malkin, All-Star Game & a look ahead to this week’s action 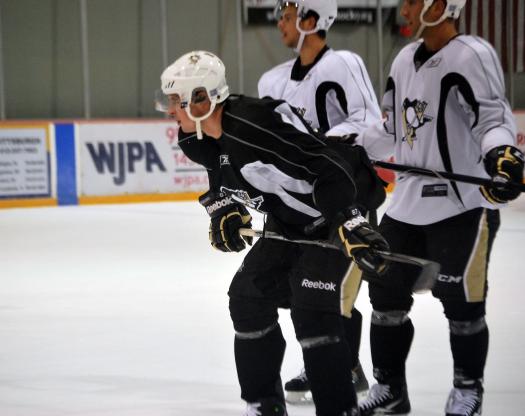 A very busy week for the Penguins who return to practice on Monday at 2:00 p.m. and then have four games in six days, starting Tuesday night on the road against the New York Rangers at MSG.
The Penguins conclude the week with a road contest against the Washington Capitals on Super Bowl Sunday in the first meeting between the rivals since the Winter Classic.
Pittsburgh is currently 4th in the Eastern Conference with 66 pts at the 50 game mark.
Here are the Penguins top storylines heading into the week, including a look ahead to this week’s action.
CROSBY CONDUCTS OFF-ICE WORKOUTS
Penguins center Sidney Crosby was cleared on Thursday to undergo what is described as “mild” off-ice workouts. It was a step forward for Crosby who has missed the past 9 games due to a concussion and his absence is pushing almost a month.
There is no timetable for Crosby’s return and an update from the team on his status is expected tomorrow following practice.
Pittsburgh has gone 5-3-1 without Crosby and he will miss his 10th straight game Tuesday night.
MALKIN TO RETURN TO GAME ACTION
Penguins center Evgeni Malkin missed the final three games before the break due to a banged up knee and an illness. He is expected to participate in tomorrow’s practice and is also expected to return to game action this week. The Penguins went 2-1 without Malkin.
LETANG NETS TWO GOALS IN ALL-STAR GAME
Team Lidstrom beat Team Staal 11-10 in the 2011 NHL All-Star Game. Goaltender Marc Andre Fleury came out on the winning side but started for Team Lidstrom and gave up four goals in the first 5:41 of the game.
Fleury made 10 saves in one period of work.
Meanwhile, Kris Letang scored two goals for Team Staal, scoring in the second and third period.
Chicago’s Patrick Sharp was named the game’s MVP.
WEEK AHEAD
2/1/11: @ New York Rangers (52GP-29-20-3-61pts)
Time: 7:30 p.m. | TV: Versus
The Penguins are 1-1-1 against the Rangers with their only victory this season against New York coming on the road, a 3-1 victory against the Rangers on November 29th.
2/2/11: vs New York Islanders (49GP-15-27-7, 37pts)
Time: 7:00 p.m. | TV: Fox Sports
The Penguins defeated the Islanders 1-0 on January 25th at home in their final game before the All-Star break. Marc Andre Fleury made 29 saves to record his 2nd shutout of the season in the 1-0 win.
Following Tuesday night’s road contest against the Rangers, Pittsburgh will return home to host the Islanders in back-to-back situations. Pittsburgh 2-1 on the season against the Islanders and 2-0 at home.
2/4/11: vs Buffalo Sabres (49GP-23-21-5, 51pts)
Time: 7:00 p.m. | TV: Fox Sports
Odd start to the break for the Sabres whose first game back won’t be until Friday night against Pittsburgh. Buffao entered the All-Star break 6 points out of the final playoff spot but are 7-3 in their last 10 games and have won two straight.
2/6/11: @ Washington Capitals (51GP-27-15-9, 63pts)
Time: 12:30 p.m. | TV: NBC
A great sports day for Pittsburgh fans as the Penguins and Capitals meet on Super Bowl Sunday in the first meeting since the Winter Classic.
If the playoffs started today, it would be a Penguins-Capitals matchup in the 4-5 seeding.
The big storyline leading up to the game is going to be David Steckle’s hit on Sidney Crosby from the Winter Classic that has led to Crosby being sidelined for almost a month.
Pittsburgh is 1-1 on the season against Washington