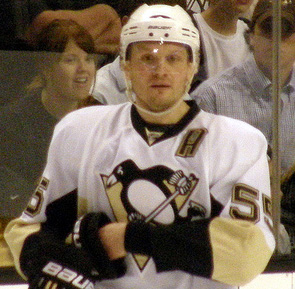 The Pittsburgh Penguins finished up their organizational meetings this week and the Penguins off-season plans are now coming into focus.
*According to multiple sources, Pittsburgh’s No. 1 priority heading into the off-season remains defenseman Sergei Gonchar. As of late Friday night, no official talks had been scheduled as Gonchar’s camp is waiting to hear from the Penguins on their timing to start negotiations. Talks are expected to begin in 10-14 days, according to a team source.
The Penguins intend to make a serious attempt to retain Gonchar, who is seeking a multi-year deal.
*There continues to be a differing of opinion when it comes to winger Matt Cooke. Cooke is believed to be a priority inside the organization but he’s viewed as replaceable and the Penguins likely won’t commit more than $1.6-1.75 million per season to retain Cooke and some have called it a stretch that the Penguins would even go that high.
Cooke who made $1.2 million last season, has a strong interest in returning but it would be a shock to many if he doesn’t at least explore the free agent market. Cooke’s value is believed to be in the $2.25 – $2.5 million per season range.
*The Penguins have an interest in re-signing defensemen Mark Eaton and Jordan Leopold. The consensus though is that the Penguins will look to bring back one of them into the fold not both.
Defenseman Mark Eaton has a close to relationship with Pens GM Ray Shero and is believed to be the bigger priority.
Eaton, 33, made $2 million in 2009-2010 and is likely to seek a slight raise in the $2.25 – $2.4 million range. One source said Eaton is torn on his future with the Pens, as the intrigue is there to explore the free agent market with this possibly being his last big pay check.
Eaton is represented by Stephen Bartlett who also represented Rob Scuderi last summer.
Leopold, 29, had 11 goals and 15 assists last season. The Penguins have already spoken to his agent Ben Hankinson and the two sides have agreed to talk again in early June.
Leopold is four years younger than Eaton and valued highly by the Pens coaching staff.
*The Penguins have all intentions of bringing back 39 year old winger Billy Guerin and will not ask him to take a significant paycut, according to a team source. Guerin indicated to Pens management during their season end meetings that he is not retiring.
Guerin made $2 million in 2009-2010.
*The Penguins will let Jay McKee and Ruslan Fedotenko test free agency without making an attempt to retain either.
As i reported Friday, the Penguins are expected to look into retaining Alexei Ponikarovsky. It remains to be seen if Ponikarovsky has any interest in returning. There’s talk going around that Ponikarovsky wasn’t a fan of the Penguins offensive system under Dan Bylsma.
Ponikarovsky was seeking a four year deal from the Toronto Maple Leafs, prior to being traded to Pittsburgh.
*The Penguins are fully expected to tender offers to restricted free agents Nick Johnson and Chris Conner next month.
Both players are expected to be given an opportunity to battle for a roster spot.
The team is currently negotiating with defenseman Ben Lovejoy who is also a restricted free agent. Lovejoy is seeking a one way deal which has been somewhat of stumbling block in talks.