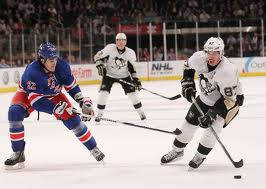 After a bit of a slow start, Crosby is in the midst of a five game points streak with 9 points (1G-8A) during that span. Through 10 games he is the Penguins leading scorer, has stayed healthy and might be playing his best overall hockey of his career. He’s become a player who takes the Penguins most important faceoffs (53% on season) in crunch time and is becoming a fixture on the penalty kill averaging 0.54 minutes per game shorthanded. Crosby is tied for third in the NHL with 10 even strength points and is averaging 1.40 points per game through 10 games. Crosby is first on the team with 39 shots on goal.  | Grade: B+ |

Malkin has points in seven of ten games and is top-5 in the league with 10 assists but he’s not playing at the dominant level he was last season. He is averaging just 2.7 shots per game. Last season Malkin averaged 4.52 shots per game, scoring 50 goals. Malkin’s average in shots per game for the previous two years (2010-2011, 2011-2012) was 4.42 per game, scoring 65 goals in 118 games during that span. He’s really down in that area (shots). Malkin indicates he is taking some time adjusting to the smaller rinks but if there’s one knock on Malkin it’s that he’s brought some bad habits back from the KHL. He’s had about one or two bad turnovers a game, including a couple critical ones that have led to goals. Malkin leads all Penguin forwards with 11 giveaways but also leads the team with 11 takeaways.| Grade: B- |

After giving the Penguins little in the offensive end in the first handful of games, Sutter has 2 goals and an assist in his last three games and has played a factor in the Penguins secondary scoring coming alive in the last three games. Where Sutter has consistently made his mark this season is his play in the defensive end. His puck management with the puck hasn’t been great but the way he plays in the defensive end from a positional standpoint is exceptional for a player who is still just 23 years old. Sutter is averaging 2:07 of ice time shorthanded and at even strength has only been on the ice for 1 goal against.  Grade: B- |

Vitale was a healthy scratch in the season opener and he hasn’t been out of the lineup since. That isn’t a surprise as Vitale has been extremely consistent, providing speed on the forecheck and getting to loose pucks. An area he continues to excel at is in the faceoff circle. Vitale was 55.7% on draws last season and is a team-best, 63.5% this season.  | Grade: B-|

With 6 goals in 10 games, James Neal continues to show last season was no fluke. He’s emerged as one of the most dangerous goal scorers in the game and it’s not just his shot. Neal thinks like a great shooter and gets to the right spots. Where Neal has been a disappointment is his play away from the net. His play in the defensive has been poor and that’s putting it nicely. He’s a team-worst minus-4 rating and Neal’s been on the ice for 6 even strength goals against. Grade: B-|

Kunitz got off to a slow start and wasn’t getting to his game early on but Kunitz is on a tear of late with 5 goals and 8 points and a +5 rating in his last three games. Kunitz is tied for the team-lead with 6 goals, +6 rating and 3 power play goals at the 10 game mark.  Grade: B |

Since the first game of the season, there hasn’t been a more consistent forward for the Penguins. Dupuis has brought constant energy to the top line and has been a force on the forecheck. Dupuis 6 even strength points are fourth on the team and is averaging 2:26 of ice time per game shorthanded. His all around play has been strong.  Grade: B |

Three games in with the Penguins, Boychuk is still looking for his first point alongside Evgeni Malkin and James Neal. I’m comfortable saying it that he’s not going to be the answer with those two but I’ve liked the speed, energy he brings to the table and ability to get to loose pucks. That’s where he’s made his mark and in the last two games he’s been on the ice for 8 scoring chances. However, at somepoint he’s going to have to start finishing some plays.| Grade: C+|

Cooke opened the year against Philadelphia with a 7 hit game, but since then, the Penguins haven’t been getting a physical game from Matt Cooke. In his last 9 games, Cooke has just 16 hits, averaging less than two hits per game during that span. He needs to get back to playing with an edge more and make the Penguins third line a little bit tougher to play against. | Grade: C- |

To me Kennedy looks like a player with no confidence in the offensive zone and has been on the ice for 5 even strength goals against. If this is the player the Penguins get for the rest of the season, I see no reason to tender him next season at $2 million per season. | Grade: D+ |

He’s been a good addition to the fourth line in providing speed and grit on the forecheck. Glass leads the Penguins with 29 hits on the season and gets some time on the penalty kill as a third pairing forward group. Showed Tuesday night vs the Islanders he will stand up for teammates. | Grade: C+ |

The soon to be 36 year old is still getting it done, leading all Penguin forwards with 2:56 of ice time shorthanded. Grade: C+ |

Jeffrey opened the year in the lineup against Philadelphia and after a poor game hasn’t been a regular since. Jeffrey has appeared in just three games and finally got a chance on Evgeni Malkin’s line vs the Islanders and Rangers, but it was a short audition as the Penguins acquired Zach Boychuk. Jeffrey, though, played well in those two games and arguably was the Penguins best forward vs the Islanders last Tuesday at home. The coaching staff are not big fans. Grade: C |

Tangradi disappointed during his three game audition with Evgeni Malkin and James Neal and assuming Tangradi sticks around, fans should just look at him as a 4th liner because that’s what his ceiling is. When in a 4th line role, he plays his best hockey but hasn’t been in the lineup in the last five games. One area where Tangradi has really disappointed is his physical game. Just 6 hits in five games. Grade: D+ |

Letang’s offensive numbers are excellent with 9 points in 10 games, ranking 2nd among all NHL defensemen. Letang’s 6 even strength points are tops among defensemen, yet it hasn’t felt like Letang has played at the level he should be. He’s struggled to emerge as a power play quarterback and there’s been some very good nights and off nights. Letang is second on the team with 25:07 of ice time per game and has been on the ice for 7 even strength goals against. | Grade: B- |

Bortuzzo has been in the lineup in four straight games and it’s going to be tough to bring him out. A very small sampling but he has the look of a very good No. 3 pairing defenseman. Bortuzzo gives the Penguins size and a bit of toughness in front of the net and his ability to skate and join the play is under-rated. Bortuzzo was a plus/minus machine in the minors and he’s a +5 through four games.| Grade: B- |

Despres has had some uneasy moments but he’s also shown a lot of flashes that made him a first round pick. His ability in the transition game at NHL speed has been impressive and he seems to be improving every game in that area. He’s made some really nice plays on goals from a bank pass off the wall to Joe Vitale leading to a goal against the Rangers on Jan 20 to setting up Evgeni Malkin for a one-timer goal last Thursday night vs the Rangers. There’s different opinions from scouts, evaluators about what Despres ceiling is but he’s going to be an impact defenseman.| Grade: B- |

The biggest development for the Penguins this season is Paul Martin re-emerging into a shutdown defenseman. The Penguins have relied heavily on Martin who is averaging a team-high 25:11 minutes per game. A difference in his game has been his gap and stick work. He’s not letting players get around him with speed and physicality that plagued him last season. Martin has also chipped in offensively with 1 goal and 4 assists. Despite seeing significant minutes per game, Martin has been on the ice for just 5 even strength goals against. | Grade: B+ |

Orpik’s play last season looked like it was slipping but his bounced back extremely well and at full health. He’s averaging 23:37 of ice per game and has a team-high 29 blocked shots, which ranks 2nd in the NHL. Is Orpik playing smarter in his own end? He has just 16 hits on the season. Last season Orpik led the Penguins with 259 hits, averaging 3.55 hits per game. This season Orpik is averaging just 1.6. Nearly two hits less a game and he’s been much improved defensively, not getting caught running around. How good has Orpik been at even strength? He’s been on the ice for just 4 even strength goals against in a 188:12 minutes. On the penalty kill Orpik is averaging a team-high 4:35 of ice time. Grade: A- |

I didn’t like Engelland’s play the first three to four games but he’s been much more effective paired with Robert Bortuzzo and has been a factor in joining the rush of late. Engelland is a +6 in his last four games. | Grade: C+|

Has not played since the fifth game of the season due to a high ankle sprain. Performed well in a second pairing role giving the Penguins some offense and good play in the transition game. | Grade: B-|

Really played well against Winnipeg on Jan 25, but his play started dropping off after and he was a bit too active in the offensive zone. Lovejoy in just 40:31 of even strength ice time, was on the ice for 3 even strength goals against. | Grade: C-|

Fleury opened the season awful at home with a 5.43 GAA and .780 sv% in his first two starts. The rest of his four starts have been very good and he had his best performance of the season Tuesday night in Long Island. The Penguins have to be very pleased with the goaltending through 10 games. | Grade: B |

Vokoun has posted a shutout and given up three goals or less in all four starts. He’s been excellent to start the year. | Grade: B+ |