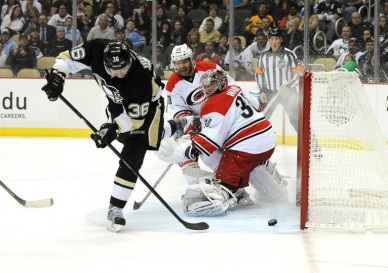 PITTSBURGH 5 – HURRICANES 2
The Pittsburgh Penguins are off to a 3-0 start for the first time since 1994-1995.
Jussi Jokinen (3) netted a hat trick, and Paul Martin (1), Tanner Glass (1) added goals, leading the Penguins to a 5-2 win over the Carolina Hurricanes.
Marc Andre Fleury played well for the third straight game, making 32 saves, improving 3-0-0 on the season and 19-3 in his last 22 home starts. Fleury has a 1.00 Goals Against Average and .963 save percentage in three starts thus far this season.
The Penguins have outscored opponents 12-3.
Pittsburgh jumped out to a 2-0 lead with a first period power play goal from Jokinen and Martin scored a 1:04 into the second period.
The Hurricanes, though, controlled the play for much of the second period, getting a beautiful goal from Eric Staal at 13:24 of the period to get them on the board and the Hurricanes strong play continued into the third period and Nathan Gerbe scored 3:13 into the third to tie the game at 2-2.
What makes the Penguins so dangerous is their quick strike and momentum changing ability, and we saw that tonight and the Penguins would score three times in an eight minute span to take a commanding 5-2 lead with two goals from Jokinen in the period and one from Tanner Glass.
Glass didn’t scored his first goal and first point of last season until his 41st game. He now has a goal and assist through three games this season and has provided a physical presence, showing much improvement from last season and giving the Penguins the ability to have such a strong balanced team right now with the 4th line being a factor.
JOKINEN SHINES WITH SKILLED PLAYERS
Jussi Jokinen is the type of player who has the skill set, smarts and instincts where if you play him with top-6 forwards, he’s going to produce. The Penguins have seen that as he now has 10 goals and 4 assists in 13 career regular season games with the Penguins and in the 13 regular season games, he’s played pretty much a top-2 line role due to Sidney Crosby being injured last year.
Jokinen’s play dropping in Carolina was more about his role, linemates than his game fading away. Jokinen tonight earned that paycheck from Carolina, who are paying $900,000 of his $3 million salary.
MAATTA SHOWING THOSE RYAN SUTER COMPARISONS
Readers of the site will know I’ve been talking Olli Maatta up for over a year with scouts raving about his ability to be a “do it all” defenseman at the NHL level with projection from many scouts as a top-2 pairing defenseman.
Those type of defenseman (Top-2 pairing) are hard to develop and a big key over the last year for Maatta has been his improved skating ability. Where he is now to where he was when the Penguins drafted him in the skating department is just something else and the feeling from scouts I’ve talked to is that’s what has accelerated his development.
At age 19, you won’t see too many defenseman play with the poise and composure that Maatta plays with in NHL games. One scout last year mentioned to me how he saw some Ryan Suter attributes in Maatta and that talk doesn’t seem to be a scout over-exaggerating. I’m not saying Maatta is going to be a Ryan Suter, few come along with that type of ability, but the Penguins might have a potential No. 1 pairing defenseman in Maatta.
Maatta tonight had 2 assists and a team-high 3 blocked shots.
GLASS PROVING DOUBTERS WRONG
I’ve been among the doubters and Tanner Glass has picked up his game tremendously through three games. The player we’ve seen through the first week of the season, is the player the Penguins scouted in Winnipeg.
Glass picked up a goal tonight but that’s just a bonus. It’s the physicality and the edge he’s playing with that continues to standout and has been big for this team that looks very balanced right now and are playing without Kris Letang and