Penguins, Rangers going in opposite directions 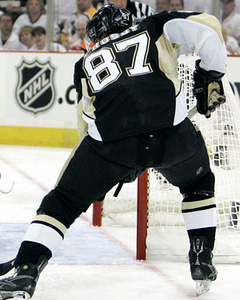 Crosby leads Pittsburgh to 8-3 win
Sidney Crosby scored once in the first period and twice in the third and added a pair assists as the Pittsburgh Penguins dismantled the New York Rangers 8-3 Saturday night at Mellon Arena.
Pittsburgh welcomed back three regulars (Kennedy, Letang, Goligoski) to the lineup and put on a show for the home fans as Evgeni Malkin, Pascal Dupuis, Tyler Kennedy, Mark Eaton and Max Talbot also added goals for the Penguins.
Pittsburgh pulled away in the third period, scoring four third period goals, including two power play goals against the NHL’s No. 1 ranked penalty kill. Goaltender Marc Andre Fleury made 25 saves to earn his 15th win of the season.
Pittsburgh improved their record to 18-9 and remain in a battle atop the Eastern Conference, with the Washington Capitals and New Jersey Devils.
Pittsburgh and New York each got off to hot starts to begin the season but just past the quarter mark, they’re two teams going in opposite directions.
On Saturday night both teams were coming off of disappointing losses from the day/night before. The Penguins responded like many thought they would. The Rangers didn’t play a horrible game but it didn’t matter how close the score was, 4-3 early in the third period, you could just tell they weren’t going to pull out the “W” with the way Stephen Valiquette was playing.
Rangers head coach John Tortorella is a Stanley Cup winning coach but lets his emotions get to him too much in certain occasions. The decision not to start Henrik Lundqvist Saturday night was one of them.
Lundqvist was pulled Friday night in the Rangers 5-1 loss after giving up four goals in 32 minutes played. Tortorella blasted his team after the game, including Lundqvist, and despite the back-to-back games, needed to go back to his No. 1 goaltender.

Post-Game Wrap up
*Dan Bylsma coached a very good game Saturday night. He found ways to get Sidney Crosby and Evgeni Malkin on the ice at even strength and he needs to continue to give them 3-4 shifts together per game.
*Could Chris Kunitz be a fit on Evgeni Malkin’s line when he returns to the lineup?
Kunitz will begin skating this week and I noticed some chemistry between Kunitz and Malkin during training camp. Malkin lacks a physical presence on his line who can win battles in the corners.
It’s also not like Crosby, Kunitz were setting the world on fire together. Bylsma should not feel obligated to keep Kunitz and Guerin with Crosby. Prior to Kunitz being injured, the line has been a fixture since March 5, 2009.
The Talbot – Crosby – Guerin line has started to develop some chemistry. Talbot’s goal Saturday night was his first since game 7 of the finals, after missing the first 21 games of the year.
For time being you keep them together and see where it goes. As for Malkin, he’s getting more production from Pascal Dupuis than Ruslan Fedotenko which is a shame.

Fedotenko has rarely shown consistency in his career, which is why he only has one 20+ goal season in his career and that came in 2005-2006 with the Tampa Bay Lightning.
*Winger Chris Bourque was a healthy scratch and will be re-assigned to Wilkes Barre/Scranton when Kunitz is available to return to the lineup. Minnesota and New York were scouting Bourque in recent weeks but to no surprise he hasn’t drawn much interest. Bourque will have to clear waivers since he was on the opening night roster.
A team source claims management would explore moving Bourque for a draft pick if such a deal came their way. His lack of offensive output has been disappointing and Pittsburgh will look to get him top line minutes in Wilkes Barre.
Their not completely writing him off yet.
*While the Penguins welcomed Kris Letang and Alex Goligoski back to the lineup, defenseman Jay McKee is scheduled to return to the lineup Monday night against the Rangers. McKee was cleared by team doctors Saturday morning.
*The Penguins are off today and will travel Manhattan this afternoon around 2:00 p.m.