Evgeni Malkin will return to the lineup today as the Penguins have hit the ice for warmups. Marc Andre Fleury is out for the second consecutive playoff game.

Will the Penguins see a significant boost to their lineup as they look to take a commanding 2-0 series lead?

Two hours before puck drop it sure seems that way. Mike Sullivan [hide] said moments ago both Marc Andre Fleury and Evgeni Malkin will be game-time decisions.

“Those guys are a game-time decision and you will soon find out.” Sullivan said with a little chuckle and smile.. 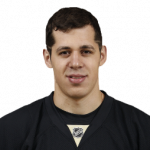 Malkin this morning was officially removed from injured reserve, something that had to happen for him to be eligible to play today.

If Malkin returns, Sullivan was non-committal about dressing seven defenseman again. Justin Schultz is likely to be the odd-man out if they don’t.

Sullivan when also asked about another injured goaltender, Matt Murray, and said Murray is making progress but did not elaborate much. He’s been listed as having a head injury, not a concussion to this point. Murray has not been practicing. 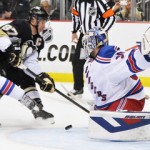 Girardi Out, Lundqvist “good to go”

Once the back bone of the Rangers, Dan Girardi has become a liability for the Rangers and was in Game 1. The Rangers say he has been playing hurt and he’ll be out of the lineup today.

Dylan McIlrath is expected to draw into the lineup for Girardi, something many observers have claimed should have happened already.

Henrik Lundqvist who practiced fully on Friday, will start in goal for New York.

0-1 since the Russian is back from his vacation. Just saying

Maatta needs to sit. Dude is playing in quicksand. Letang off the power play.

Yeah and you should stop posting stupid shit. Let’s see what will happen first.

Stupid to sit a human pylon. And Letang brings nothing to the PP except poor passes

Nothing screams top notch penguins coverage than Ellis Cannon breaking it down.

It’s tough to win when your goalie turns the puck over repeatedly in the neutral zone.

Did you notice the hot goalie couldnt handle most high quality chances? Hopefully the Rangers can pepper in another 37 instead if Zatkoff has to go again next game

Don’t worry. Fleury will bail the pens out. His playoff track record is stellar.

Agreed. Stanley Cup and best player on the ice for the Pens the past two years.

That loss is on Zak. Fleury would have overcome another piss poor team performance

No, something special is my balls deep in your mouth.

Can you feel them

We get it dude – Sam isnt the only one with awful jokes. Now how bout a YouTube clip?

Give c to chubby right stan

Something special was Sid’s effort.

Won’t get an argument from me, he wasn’t great

Give Cullen his minutes. Go with the hot center

Shit, if your star center is going to get shutout might as well be Cullen.

Kessell showing up big today…..sidney, not so much.

Smart play Geno… Good thing he’s back on the PP. Chubby with two

Told you clowns jerkoff no. goods but droolers like sam call me dumm

Pens guilty of laying back a bit after a dominant game one?

Dominant ? You mean the goalie that bailed them out

Lol, if you think the defensive effort in this game was the same as last… Nope never mind… Explains a lot actually lol

Bet Sestito would have been great today!

Would have taken him over Sid

0-1 since malkin. Is back from his vacation now you clowns believe me he is a jinx

Lol, jinx is not real dumbass… He looks rusty. The team as a whole haven’t played that well and the hot goalie cooled off fast

Pens will lose to the Devils #SamKnew

Maatta needs a power skating class, still gonna be good but he needs to work on his movement

Mike Johnston will be a better coach than DB. #SamKnew

Zatkoff will be traded #SamKnew

Jeb Bush will be next US president #SamKnew

trade the russian. team looked better without him

Try to convince to the rest of the clowns here

Told you guys pens shouldve traded maatta this year yet he gets a contract extension. Have fun watching this turtle for the next 6 years

Relax, have a hotdog

It’s time for HMCS to strongly considering getting Maata away from Letang. Maata just can’t log the minutes against that level of competition right now. 3 times through the first 21:00 he got caught out of position and leaning the wrong way, 2 led to breakaways and the 3rd led to a clear from the Ozone.

Sadly the 4th time actually led to a break away goal.

Get that man a hot dog!

Im almost as excited to see Rust back in the lineup. Love watching him play.

How high is the Pens self exteme right now, knowing Geno is back?

found a live working link for all of you guys at work like me. lets go pens!

Malkin and Rust both taking warmups

No Fleury. Something special to start.

When yogurt and maloni agree on something, it has a 0% chance of being correct.

if st.blurry starts he will let in a goal within the 1st 3 minutes. you guys will be playing the concussion card tonight for your excuse.

Whats your excuse for being wrong about every prediction you made this year? Even after Sullivan started, they were still only finishing 8th/9th according to yogurt.

This Year???? He’s been wrong about every prediction he’s ever made except 1. You’d think there would come a time when he got tired of ALWAYS being wrong and would just quit making predictions.

I’m guessing the injury to Girardi is nothing more than showing a veteran some respect as opposed to just saying he isn’t paying because he’s horrible.

Maloni will be pissed with Zatkoff probably not starting. Now, his Zatkoff leggings will just look silly.

Your fat ass doesn’t need a donut. Now go scrub out the shitters like a good employee.