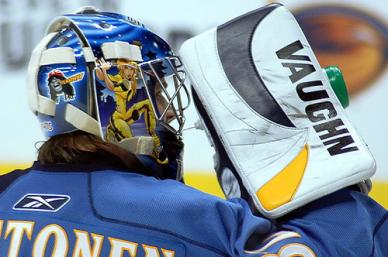 Atlanta Thrashers (30-35-6) @ Pittsburgh Penguins (37-26-8)
***Morning Skate Update***
The Penguins just concluded their morning skate. There will be no lineup changes from Sunday’s game other than Marc Andre Fleury starting in goal. It was believed Craig Adams would get back into the lineup tonight but he was the extra forward in the skate.
As expected Evgeni Malkin did participate in today’s morning skate and will play tonight.
The Atlanta Thrashers on a 6 game winning streak will be without forward Ilya Kovalchuk tonight who has missed the Thrashers last two games. Ilya Kovalchuk did not make the trip to Pittsburgh and head coach John Anderson indicated Kovalchuk will likely return to the lineup on Friday for the Thrashers.
Morning Skate and Lineupnews

Lineup
Kunitz – Crosby – Guerin
Fedotenko – Malkin – Sykora
Cooke – Staal – Kennedy
Dupuis – Talbot – Godard
Defensemen
Orpik – Gonchar
Eaton – Letang
Gill – Scuderi
* Marc Andre Fleury will start in goal
Scratched: Craig Adams
Notes from Morning Skate
Power Play Changes: The Penguins first unit will officially see Evgeni Malkin off the left point for tonight’s game. The Penguins worked on the power play this morning with Sergei Gonchar and Kris Letang on the points.
The Penguins had Evgeni Malkin moving around a lot with Sidney Crosby still playing right top circle for the majority of the time. Bill Guerin and Chris Kunitz alternated with Kunitz getting a few more reps.
Boucher picking up regiment: Defenseman Philippe Boucher was the first player on the ice this morning. He was woking heavily on his lateral movement and I’m still hearing he is about a week from coming off of injured reserve.
WBS Report: Miroslav Satan had a four point night ( 1 goal – 3 assists) in his first minor league game since 1995. Satan will be back with the Penguins once the playoffs begin. He could give the Penguins some options for their second line.