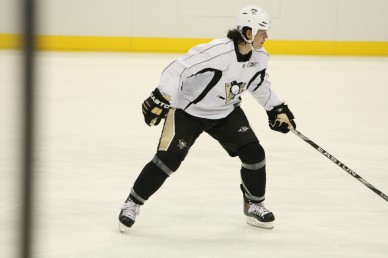 Monday Practice Notes
— The Penguins continue to inch closer to getting back to full on the heels of the Sidney Crosby news this morning.
— Forward Arron Asham who has been sidelined since Feb 1, as expected, participated fully in today’s practice and his availability to return to the lineup is imminent. Asham said he is working his way back into game shape and will be an option to play by the weekend.
However, as mentioned last week, Asham faces obstacles in getting back into the top-12 as the Penguins roster is getting full.
It remains to be seen if the staff will look to open him up a spot.
— Elsewhere on the injury front, Mike Comrie continues to progress and is skating extremely hard during individual wortkouts. He’s very close to be cleared to practice with the team. But, it’s hard to envision a scenario where he gets a strong look from the coaching staff to crack the top-12.
— The Penguins will recall a defenseman or maybe two {defensemen}, depending on the health of Kris Letang for their trip to Ottawa this afternoon.
Defenseman Matt Niskanen has a bad case of the flu and will not travel with the team. He will miss his second straight game.
Brian Strait is expected to be recalled, although no official decision has been made yet. Would like to see Robert Bortuzzo get the callup but there is a need for another left handed defenseman.
— Meanwhile, Letang skated briefly this morning and left practice to go to a scheduled doctors appointment for a follow up on yesterday’s hit. The Penguins are hopeful to bring him on the trip and the sense is that he’s fine.
— Nick Johnson will begin skating this week for the time since suffering a concussion last month against the Colorado Avalanche.
— Bylsma on Crosby: “He has been exercising off the ice and this was the next step in his progression, getting on the ice. In no way shape or form is there any time table at this point in time. This is just the next step for him to get on the ice and be able to exercise.”
— Information provided by Will DePaoli and Tim Benz–