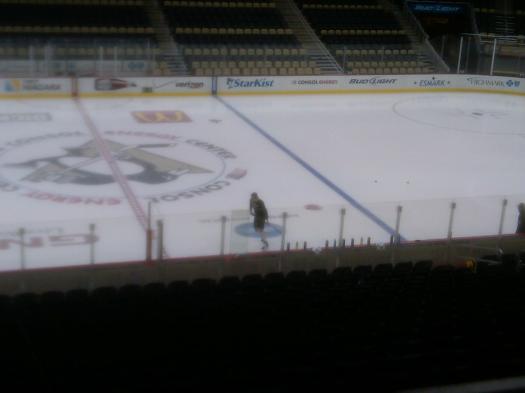 10:15 a.m. – The Penguins are begining to hit the ice for their 10:30 a.m. morning skate. Evgeni Malkin jumped on the ice about 15 minutes ago skating around in shorts. He has now joined his teammates in full gear. He appeared to be working out a new stick or skates.
10:32 a.m. – Here’s how the lines have shaken out in the morning skate
Kunitz – Crosby – Dupuis
Cooke – Malkin – Talbot
Conner – Letestu – Kennedy
Rupp – Adams – Asham/Godard
*Notes: Arron Asham first opened up the skate on the 5th line as Rupp – Adams – Godard opened up as the 4th line. When the Penguins finished up their normal line rushes, Rupp – Adams – Godard and Asham skated as a unit of 4.
Asham told me yesterday’s he over his stomach flu and chest infection, so i can’t imagine any reason why he won’t play tonight.
*Marc Andre Fleury will start in goal for Pittsburgh.
Power Play Units
Here are the power play units being used this morning
1st unit: Kunitz – Crosby – Malkin
Letang – Martin
2nd unit: Kennedy – Conner – Letestu
Goligoski – Michalek