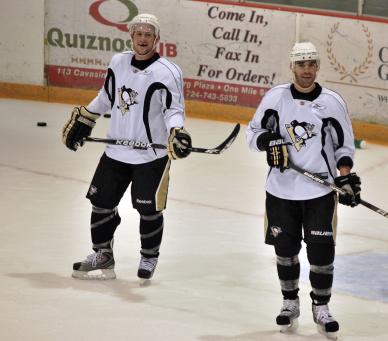 Penguins winger Matt Cooke is practicing today as the Penguins just took the ice around 11:00 a.m. Cooke is skating on the third line with Jordan Staal and Pascal Dupuis.
Cooke will not learn his fate regarding a possible suspension until this afternoon. There is a strong vibe coming from league insiders that Cooke won’t be suspended, which will be a shock to many.
Winger Tyler Kennedy is not practicing for Pittsburgh. He is believed to be bothered by a lower body injury, according to a team source.
Pittsburgh’s lines in today’s practice
Kunitz – Crosby – Guerin
Ponikarovsky – Malkin – Fedotenko
Cooke – Staal – Dupuis
Rupp – Adams – Talbot