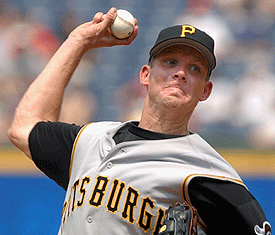 Orlando Hernandez (El Duque) dominated the Buccos only giving up four hits through seven innings. The Mets are now the first team in the national league to 50 wins and are in the driver seat in the NL East with a 11.5 lead in the standings. Kip Wells 0-4 12.42 era showed tonight why it’s time ( two years late) to finally send him packing. He’s been here for five years has never produced and every year we hear about how much talent he has. He has talent in the Pirates eyes not the other 29 teams in the major leagues. No wonder were on our way to watching a 14th straight losing season. I’m sure Jim Tracy will be saying tomorrow morning on how Kip turned it around after his horrendous first inning. This is the garbage sound bite Jimbo Tracy will most likely give us ” Kip showed heart coming out there in the 2nd inning after surrendering 5 runs to the Mets. It wasn’t all Kips fault. The bounces weren’t going his way but He battled from then on out producing five scoreless innings and that shows the coaching staff and I what kind of pitcher he can be”. Pirates 29-57 will try to take 2 out 4 against the Mets tomorrow night before heading to Philly for the a weekend series with the Phillies. 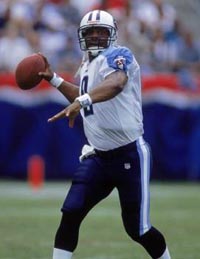 With Steve McNair at the helm the Baltimore Ravens are a team to watch in the AFC according to NFL experts. Sportscenter recently did a NFL ultimate depth chart with three of their NFL experts and all agreed that the Ravens will be a wildcard team and even bonehead Sean Salisbury said ” Ravens could upend the Steelers in the AFC North”. That will not happen but the Ravens will be a playoff team. The biggest issue is McNair. Can he still produce and stay healthy?

McNair was on a lousy team the past two seasons and although he’s not the quarterback he use to be, with a strong running game; Steve McNair will revive his game. The Ravens have talent at Wide receiver with Derek Mason, Mark Clayton and Todd Heap. In the backfield the tandem of Jamal Lewis and Mike Anderson is going to be a Steelers kind of running game. Defensively is where I question this team. Ray Lewis has lost a step but if Ed Reed can stay healthy then they will overtake the Bengals for second place in the division. The Steelers will run away with the AFC North. At a round table discussion with my uncles at a 4th of July party this week not one said the Ravens had a chance to be a playoffs because McNair won’t hold up. I tend to differ on this front and my Uncle Paul will disagree with me on this one: The Ravens will be a wild card team and capture the 6th playoff berth in January. Mark it down!!!!!

For information,rumors and analysis on the NHL and future Penguins signings click(DePaoli’s NHL Insider) link in the right column or log onto www.nhlrumorscentral.blogspot.com