Pirates and Cubs ideal trade partners leading into the deadline? 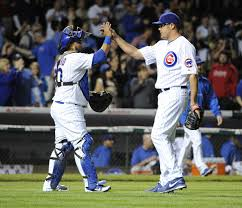 The Pirates (58-39) picked up a 6-5 win over the Washington Nationals Monday night but the win was a costly one as All-Star closer Jason Grilli (30 saves, 2.85 ERA) left in the ninth inning with forearm tightness. The look on Grilli’s face, his teammates, and manager Clint Hurdle told the story that it could be a potentially severe elbow injury. All indications are Grilli will be out for an extended period.
While GM Neal Huntington has been checking around on the bullpen market in attempt to add an arm, he hasn’t been looking for a closer.
Grilli’s injury changes those plans or at least it should.
Mark Melancon (26 HLD, 0.97 ERA) immediately moves into the closers role for now. The All-Star has been the Pirates best reliever and one of the best relievers in baseball. What attracted the Pirates to Melancon last off-season was that they felt he could be good insurance for Grilli were he to falter. Melancon had 20 saves for the Astros in 2011 but you hate to take him out of that setup role where he has flourished this season.
Assuming Grilli’s injury is significant as in missing at least six weeks, Huntington owes it to this team to aggressively seek a closer, No. 8 inning type. The Grilli injury is likely to spark trade talks surrounding Cubs closer Kevin Gregg. The 35 year old has 19 saves and a 2.80 ERA on the season. He makes $5.2 million. Gregg is not Jason Grilli but he’s a adequate late inning guy.
Huntington and Cubs president Theo Epstein are good friends and have a history of working out deals. The Pirates have also showed some interest in Cubs outfielders Nate Schierholtz and David Dejesus. Schierholtz, 29, is hitting 269/.329/.492 with 11 home runs and 35 RBIs. He is making $2.25 million and is under team control through next season.
Dejesus, 33, hasn’t played since June 14th but is on the mend and expected to return to the Cubs lineup this month. The Pirates have been scouting rehab games and tried to sign him two off-seasons ago. Dejesus is hitting .260/.318/.445 with 6 home runs and 21 RBIs in 59 games.