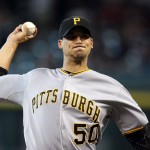 — The Pirates got over the .500 hump for at least one night, defeating the Houston Astros 7-3 on Wednesday night at Minute Maid Park.
With the victory the Pirates improved to 34-33 on the season and 19-15 on the road. This is the latest they have been over .500 since August 1999, when they were 59-58.
— The Pirates finally got a breakout game from their offense with Charlie Morton (7-3, 3.21 ERA) on the mound. The notable players tonight were…..
Xavier Paul (.284) went 3-3 with a home run, 2 RBI’s and 2 runs scored in the victory.
Neil Walker (.261) was big for the Pirates early on, delivering the Pirates first two runs of the game.
Walker tripled in the first inning that scored Andrew McCutchen and than singled in the third inning, scoring Matt Diaz to give the Priates a 2-0 lead in the top of the 3rd.
Walker added his 3rd RBI of the game in the 8th inning on a sacrifice fly, scoring Garrett Jones.
Walker went 2-for-3 in the game with 3 RBI’s and walk.
Andrew McCutchen (.293) extended his hitting streak to 14 games. McCutchen went 1-for-3 in the game with 1 RBI, 1 run scored, 2 walks and a stolen base. McCutchen has stolen a base in back-to-back games.
— Charlie Morton lasted only five innings but earned his 7th win of the season. Morton allowed 8 hits and 3 runs, while striking out 3 and walking 2.
He left after the fifth inning throwing 109 pitches (68 strikes).
Morton was plagued early on by suspect fielding from third baseman Brandon Wood.
Morton had 8 ground ball outs. Daniel McCutchen relieved Morton to open the bottom of the sixth and threw three scoreless innings.
— Joel Hanrahan continues to emerge as one of the best closers in the game, earning his 19th save of the season. He is now 19 for 19 in save opportunities.
All it took was 7 pitches for Hanrahan to get the final two outs of the game. He has lowered his ERA to 1.39.
Hanrahan though will not be available to pitch tommorrow as tonight was his third straight outing.
— Houston starter J.A. Happ gave up six hits and two runs while striking out seven in five innings.
— Pirates catcher Michael McKenry (2-for-5, 1R) singled in the second and seventh innings for his first career hits after entering the game 0 for 14.