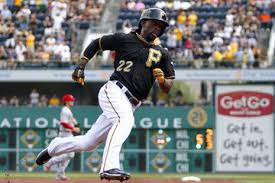 HARRISON HITS WALK-OFF HOMER
It’s August 7th and the Pittsburgh Pirates (68-44) boast the best record in the Major Leagues. The Pirates are a team that has some holes like all teams but they are starting to have a special feel about them that winning teams have.
Tuesday night was one of those games where the Pirates are pulling out games in heroic fashion that they would always lose in the past.
Josh Harrison had the heroics last night with a walk-off homer in the ninth as the NL Central-leading Pirates have won three straight to move a season-high 24 games over .500.
Pinch hitting for the struggling Garrett Jones, Harrison sent a fastball from reliever Mike Dunn deep to right center for the thrilling 4-3 win over the Marlins.
“Those are little things that happen that make you go yeah there’s something going on,” Hurdle said. “There’s no doubt the more feel good you get, the more you feel good.”
BIG PERFORMANCES FROM MCCUTCHEN, ALVAREZ
The Pirates two best players, Andrew McCutchen (.309 – 15 HR – 64 RBI) and Pedro Alvarez (.241 – 27 HR – starred Tuesday night. Trailing 3-0, McCutchen hit a two-run double in the third and then McCutchen saved two runs in the seventh with a highlight reel diving catch in center.
McCutchen’s all around play has him emerging as a front runner for the NL MVP award.
Alvarez capped off a three run third inning with just his 4th triple of his career, hitting a liner to center and beating out a relay with great determination and hustle. “That gets everybody excited,” Hurdle said.
LOCKE REGRESSING
It was only a matter of time before Jeff Locke (9-3, 2.47 ERA) started to regress and it’s starting to happen after the All-Star break now. Locke allowed 9 hits and 3 runs in 5.2 innings receiving a no decision Tuesday night. He threw first strikes to just 13 of 28 batters and Locke has allowed 27 hits in his last three games.
Is it just a bump in the road?
WALKER HAS 3 HIT GAME
Neil Walker’s (.251 – 7 HR – 31 RBI) inconsistencies at the plate has led to some talk that the Pirates should consider platooning Jordy Mercer and Walker at second base (when the Pirates face lefties) to keep Clint Barmes glove at short.
Walker, though, is starting to show some signs of possibly getting hot. Walker went 3-4 in the win and has hit safely in seven of his last ten games and has three multi-hit games during that span. Walker is hitting .286 since the All-Star break.
Walker is hitting just .186 vs lefties on the season.