A 1-2 punch of Tabata, McCutchen at top of the lineup could provide Pirates with type of “small ball” they want to play 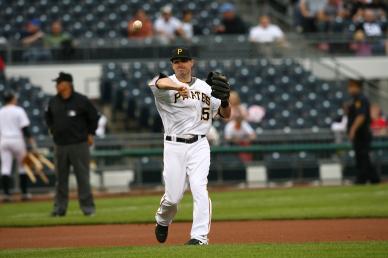 The Latest Pirates Buzz
Photo: David Hague – Inside Pittsburgh Sports
*Pirates management talked extensively coming into the season about being more aggressive on the basepads at the top of their lineup. At one point in April the Pirates led the National League in stolen bases but have gotten away from that philosophy in the month of May.
Andrew McCutchen led the Pirates with 10 stolen bases in the month of April. All of a sudden he has just two stolen bases in May (21 games) and has not attempted to steal a base in nine games. McCutchen is second in the NL with 12 stolen bases. The Pirates moving McCutchen to the No. 3 spot has been pegged as the primary reason.
*Neil Walker has rejuvenated his career in the minors and now gets the opportunity to show that can be a regular at the MLB level. Walker was over matched at the plate during his September callup, batting .194. Scouts now believe Walker will have different results this time around and has improved in all areas in his game.
In the field Walker brings versatility. In Triple-A, Walker saw time at first base, second base, third base, left field (14 starts) and  has committed just 1 error this season.
Walker made 21 starts at second base and it’s a position that he appeared very comfortable playing. After Steve Pearce was called up, Walker made 7 starts at first base.
The Pirates are in the position where they need to be patient with Walker and he needs to play everyday.
*Walker’s development at the MLB level could dictate Andy Laroche’s future with the team. LaRoche is currently a player without a long-term position as Pedro Alvarez will be called up in the next 4-6 weeks. The growing consensus is that LaRoche would then move to second base once Alvarez comes up but that was when the Pirates had written off Walker. At this conjecture, that’s no longer the case.
*Top prospect Jose Tabata went 3-for-5 and scored two runs Monday night. Tabata is now batting .328 and has seen extensive time in left field (moving from CF), a sign that a callup is close.
Tabata has the ability to address a major need for the Pirates at the leadoff position. Tabata leads the Indians with 19 stolen bases.
Once Alvarez arrives in the majors, the Pirates will then be able to get Andrew McCutchen out of the No. 3 hole as he’s more of an asset in the No. 2 hole.
A 1-2 punch of Tabata-McCutchen at the top of the lineup will provide the Pirates with the kind of “small ball” game they talk about wanting to play.
*Despite the soon arrival of Tabata, Lastings Milledge remains a player that the Pirates want to keep around. Milledge is batting .256 with 0 home runs and 15 RBI’s.
*22 year old Cincinnati Reds pitcher Mike Leake takes the mound for the Reds tonight against Paul Maholm. Leake (4-0, 2.91 ERA) was the Reds 1st round pick in 2009 (8th overall) and never spent anytime in the minors, winning a spot in rotation out of spring training.
There continues to be talk that Pirates GM Neal Huntington is looking for a similar result when it comes to evaluating pitchers with the No. 2 selection in the upcoming draft. A reason FGCU’s Chris Sale is on the Pirates radar.