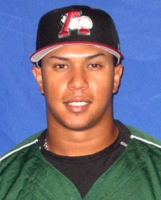 One of the more interesting storylines for the Pirates going into the 2010 season will be whether top hitting prospect Jose Tabata claims a roster spot coming out of spring training.
Tabata, 20, was promoted up to Class AAA Indianapolis last week after batting .303 in 61 games for the Altoona Curve (AA) and is on the verge of being MLB ready.
Tabata has been on a tear since early July and has continued his strong play in AAA, batting .385 in three games with Indianapolis.
With the minor league season ending in early September, it has been speculated that Tabata would be a potential September call-up.
Indications are that won’t be the case and infact, Tabata will not have a strong chance of making the club out of spring training.
It is expected that Tabata will spend the first couple months of the 2010 season in the minors, so his free agent clock doesn’t start.
Sometime after Memorial Day (2010) is where the team projects Tabata to be a regular on the Pirates 25 man roster.
Regarding Tabata’s value, there continues to be mixed opinions around the league. Some scouts value him as the 3rd rated prospect in the Pirates system while others rank him as number 6 or 7.
There are age concerns and questions about his frame with scouts having concerns that he’ll have the power to be a corner outfielder.
Pirates Committing to Adam Laroche at third base for the 2010 season?
In what has been somewhat surprising, the organization has full intentions on
committing to Andy Laroche at third base for the 2010 season. The coaching staff, especially John Russell is very high on Laroche who ranks 2nd defensively for third baseman in the National League as of August 1st.
Laroche has shown gold glove ability at third but is among one of the weakest hitting corner infielders in the majors.
Laroche is batting .262 with 4 home runs and 39 RBI’s on the season. LaRoche has just eight RBI’s in his last 139 at-bats but the organization will stick with Laroche as long as they can.
The Pirates have a major need to add more power on the corners. Pedro Alvarez will provide that and some scouts believe as early as next season, he will be moved to first base but nothing is set in stone.
After Alvarez there are major question marks. Newly acquired Jeff Clement is a wildcard and will get a strong look at first base.
The intriguing prospect at 3B is 23 year old Neil Walker. The former first round pick continues to disappoint at the minor level but he has shown glimpses of having 17-20 home run potential.
Walker is batting .246 (Class AAA) in 68 games with 10 home runs – 42 RBI’s and his future with the organization is up in the air.
Walker was drafted by the Littlefield regime and with the organization being high on Laroche, his chances are slim to earn a roster spot next season.