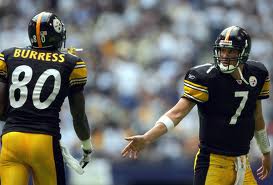 Steelers wide receiver Plaxico Burress went down with a shoulder injury in Thursday’s practice and the early prognosis is not encouraging. According to Adam Schefter of ESPN, Burress has a torn rotator cuff that could be season ending. If the injury is season ending, it likely also means the end to Burress career.
Burress signed a one year deal in March with the Steelers brass believing Burress could be a potential situational receiver in a No. 4 receiver / Red Zone role.
However,with the early emergence of Markus Wheaton who the Steelers believe will start the year as the No. 3 receiver, Burress was going to be no lock to dress on game days or make the team as he was entering a roster spot battle with Jerricho Cotchery, as word this week has been that the Steelers were unlikely to keep both.
Justin Brown and Derek Moye have both had strong camps.