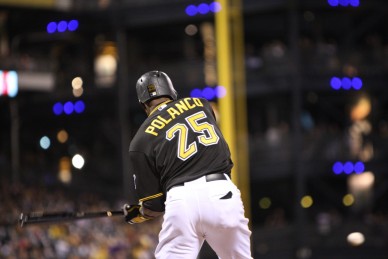 Win: Tony Watson (2-1)
Loss: Joaquin Benoit (5-4)
Save: Mark Melancon (28)
Gregory Polanco helped free a grounds crew man underneath a tarp during a rain delay, drove in the game winning run in the eighth, and actually walked vs a left handed pitcher.
Polanco, Pirates (49-34) beat the Padres 3-2 on Tuesday night, earning their first series win vs the Padres at PNC Park.
With the game tied at 2-2 in the eighth, Sean Rodriguez was hit by pitch from Joaquin Benoit to lead off the inning and Polanco would later triple with two outs, giving the Pirates their fourth straight win, and seventh win in their last eight games.
Management continues to preach patience for Polanco who is hitting .232 on the season and is just 2 for his last 19, but in addition to the big hit in the eighth, manager Clint Hurdle feels Polanco’s swings have been better of late.
“That was a pretty swing put on the ball,” Hurdle said of Polanco. “He’s had a lot better swings lately.”
Tony Watson got the win throwing a scoreless eighth, while Mark Melancon picked up his 28th save of the season.
Francisco Liriano received a no decision. Liriano went allowed 2 runs and 4 hits in six innings, striking out 6 and walking 1.
The Pirates with the win are an MLB-best 23-10 since June 1 and have now climbed within 4.5 games of first place with a big four game series looming with the Cardinals starting Thursday.
The Padres and Pirates wrap up their series tonight.
Photo (David Hague)