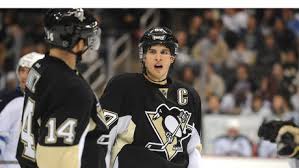 PITTSBURGH 3 – TORONTO 1
Sidney Crosby broke a 1-1 tie with 6:03 left in regulation for his 19th goal of the season and the Penguins (24-10-1, 49 pts) continued their winning ways with a 3-1 win over the Toronto Maple Leafs (17-15-3, 37 pts) on Monday night.
Chris Conner (3) and Brandon Sutter (6, empty net) also scored in the win. Marc Andre Fleury made 25 saves for his 19th win of the season and is now 27-3 in his last 30 home games.
The Penguins have won 9 of 10 games and many wonder how they keep doing it.
We all know about the young talent on the blueline but the recent injuries at forward have led to the Penguins relying on speed and physicality instead of trying to beat teams with skill.
The Penguins don’t have any forwards in their system that screams top-6 forward, especially in Wilkes Barre, but what Penguin management does a very good job of is targeting players with speed and energy to fill the organizational depth chart on a year to year basis. Targeting depth players who have speed and play with a lot of energy is a no brainer based on the system in place by the head coach.
If you’re not a skilled player, an easy way to flourish in Dan Bylsma’s system is to possess speed and play with energy. That’s one reason evaluators I’ve spoken with feel AHL players who fit these needs come up and have success in small doses during callups with the Penguins.
We’re seeing that again this season.
“We keep finding ways and lot has to do with the way those guys are playing,” Sidney Crosby said of the Penguins callups. “C {Chris Conner} started us off there with that goal, first shift, and things like that go a long way.”
“These guys have been coming up and playing with confidence and doing a good job. That’s exciting for the organization,” defenseman Matt Niskanen said.
Believe it or not, but at forward the Penguins are a harder team to play against right now than they were three to four weeks ago. Obviously not better when you’re missing a Malkin and Neal, but upfront the Penguins are faster, playing with more energy and the recent callups have the Penguins playing more physical, as head coach Dan Bylsma noted afterwards.
“When it comes to physicality of the game, I don’t think our team has been an overly physical team this year, hasn’t been our identity,” Dan Bylsma said. We’ve focused on being better in that regard in terms of our forecheck, there in offensive zone. That’s something we’re trying to get better at and with the addition of some of the players that we’ve had in recent week, they’ve probably brought more physicality than some of the guys that aren’t in the lineup right now. Tonight it was something we tried to focus on, establishing our forecheck.”